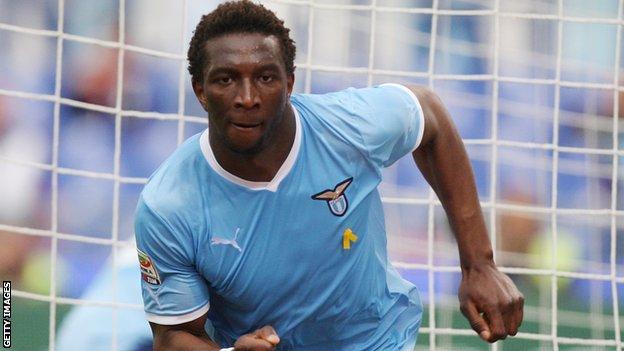 Sunderland have agreed a deal for defender Modibo Diakite, who is set to arrive from Lazio on a free transfer.

The 26-year-old France-born player will become Paolo Di Canio's first major signing since he became manager of the Black Cats at the end of March.

Diakite could be joined in the heart of the defence by Maritimo centre-back Valentin Roberge, who is also a target.

The Italian has been critical of the current squad and said he is looking to sign six players during the summer.

Di Canio needs to recruit more defenders with Titus Bramble and Matt Kilgallon set to leave on free transfers, while on loan full-back Danny Rose has returned to his parent club Tottenham.

Diakite, whose contract with Lazio expires next month, joined the Serie A club in 2006 and helped them qualify for the 2007-08 Champions League. However, the defender suffered a serious leg injury at the start of the following season and missed the rest of the campaign.

He lost his place in the Lazio first team because of a shin injury and failed to regain his spot.

Last month, the player's agent was quoted as stating that Diakite was "not far from an agreement with Napoli", while he was also linked with a move to Liverpool.

Frenchman Roberge, 25, is in the final few months of his contract with his Portuguese side and can move on a free transfer on 1 July.