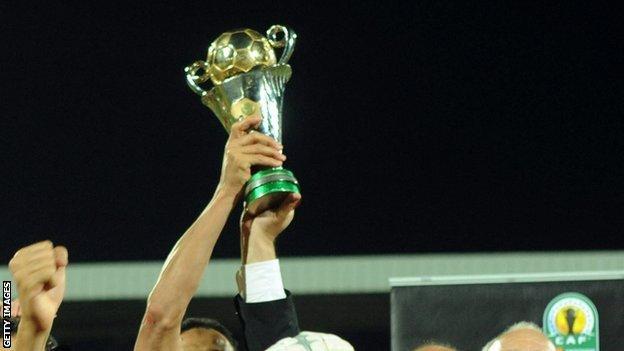 St George became the first ever Ethiopian side to qualify for the group stages of an African continental club competition despite losing to Egypt's ENPPI in the Confederation Cup.

ENPPI won the second leg of their play-off tie 3-1 to make it 3-3 on aggregate, with the Ethiopian side advancing on the away goals rule.

St George will join Mali's Stade Malien, Enugu Rangers of Nigeria and Etoile du Sahel of Tunisia in Group A of the tournament.

Algerian champions Entente Setif, DR Congo's TP Mazembe, FUS Rabat of Morocco and Tunisian side CA Bizertin all won through to Group B.

Ivorian striker Vincent Die Foneye opened the scoring for ENPPI after 25 minutes but Tesfaye Alebachew left the hosts with a massive task when he equalised 12 minutes later.

Die Foneye then struck twice in the last six minutes to complete his hat-trick but St George held out to eliminate the Egyptians.

Former two-time champions CS Sfaxien crashed out after they were held to a goalless draw at home by Nigeria's Enugu Rangers, who go through 1-0 on aggregate.

FUS won the Rabat derby 4-3 on aggregate after their second leg against FAR finished 3-3 on Sunday.

FAR took the lead through Mustapha Allaoui on the hour mark but two goals in three minutes from Hicham Laroui and another from Benjelloun gave FUS the lead again.

A last minute equaliser from Youness Hammal was not enough for the army side to advance.

There was more bad news for Egyptian sides when Ismaili crashed out too also despite winning at home as they beat CA Bizertin 1-0.

The Tunisian side advanced thanks to their 3-0 win in the first leg two weeks ago.

Midfielder Ahmed Khairy grabbed the only goal of the second leg with a powerful header three minutes before the break.

TP Mazembe of DR Congo, watched from the stands by new coach Patrice Carteron, also went through despite falling to a 2-1 defeat away to Liga Muculmana of Mozambique.

The former African champions won the tie 5-2 thanks to their 4-0 victory in Lubumbashi.

Elsewhere, Algerian champions Entente Setif found the "miracle" they needed to beat Gabon's US Bitam to qualify for the group phase of the Confederation Cup .

Setif had travelled to Gabon with a depleted squad of 14 players, including thee goalkeepers for the second leg match.

Hosts Bitam won 2-0 on Saturday to make it 2-2 on aggregate with the Algerians eventually winning 5-3 on penalties.

Before the match assistant coach Kheireddine Madoui had said: "It will truly be a miracle if we qualify for the group stage."

The current Algerian Ligue 1 champions were then forced to register young goalkeeper Amar Saadoune as an outfield player.