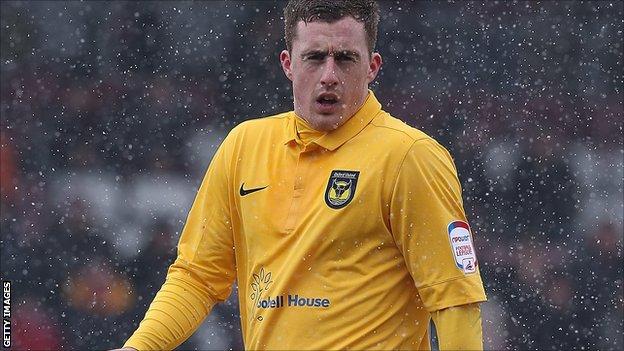 Oxford United midfielder Scott Davies has vowed to repay the faith shown in him by manager Chris Wilder.

The 25-year old was handed a one-year contract at the end of the season after joining on a short-term deal in March following his release from Crawley.

Davies survived a major squad clearout over the summer and he told BBC Radio Oxford that he hopes to stay at the Kassam Stadium for as long as possible.

I am thankful to Chris Wilder for the opportunity. It's a massive club and a club who should be in a bigger league and hopefully we can achieve that next season

"I want to get my career back on track," Davies said.

"It's nice for the manager to show some faith in me and offer me a new contract. A year is a great situation for me to have and my aim is to get a longer deal as soon as possible, and that will only happen by putting in some good performances.

"It's down to me, I want to be here long-term and I don't want to be one of the players chopped at the end of next season.

"We lead a nice life and play football for a living but we have to fight for our future and I'll be doing everything I can to do that."

Davies began his career at Reading before joining Crawley in July 2011. Following his release by the Red Devils in March he played 13 times for the U's, scoring once.

Oxford have released 12 players following the conclusion of the 2012/13 season, including defender Michael Duberry.

Ex-Chelsea and Stoke man Duberry, 37, played 50 times in his two seasons at the Kassam Stadium.

Davies is now relishing his time at the League Two club and is determined to extend his stay at the Kassam Stadium further - and make up for lost time having failed to feature for Crawley at the start of the 2012/13 season.

"I am thankful to Chris Wilder for the opportunity," he continued. "So far, so good. It's been enjoyable and hopefully I can continue that and do well next season.

"It's a massive club and a club who should be in a bigger league and hopefully we can achieve that next season.

"To be part of the squad is a pleasure, with the fanbase we can do well next season and achieve what we want to achieve.

"I had seven or eight months wasted but now I'm at Oxford and looking to earn a longer-term deal than the one year I've got."

Meanwhile, £50,000 of funds from Oxford United have been invested in a complete renovation of the pitch at the Kassam Stadium - something the club feel will provide the U's players with the best possible surface to help their promotion ambitions for next season

After consultations with the Stadium Company about the level of work that was due and the timescale surrounding it, the club took the decision to act quickly and have appointed what the U's say are "top specialists" to advise and complete the project.