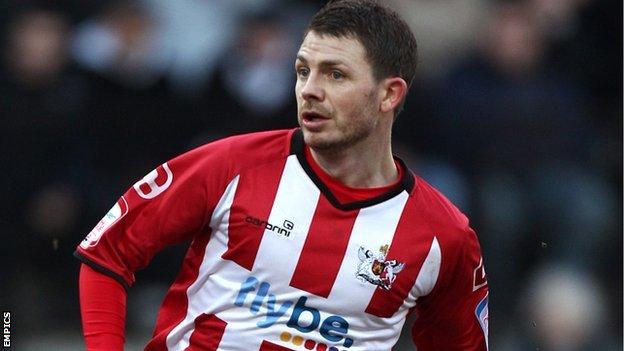 The 37-year-old has scored 247 goals in 714 appearances and Cheltenham will be the 12th English club of his 20-year playing career.

He played 42 games during the 2012-13 season and his 21 goals saw him finish second in the League Two scoring list, behind Port Vale's Tom Pope.

The forward's deal with the Grecians was set to expire this summer and manager Paul Tisdale admitted he could not re-sign their top scorer unless the club's finances improved.

"I was quite settled at Exeter but they weren't able to offer me a contract," Cureton told BBC Gloucestershire.

"I've seen the progress the club [Cheltenham] has made after playing against them and I was impressed."

Cureton started his career at Norwich and went on to sign for Bristol Rovers in 1996.

From Rovers he joined Reading before spending six months in South Korea playing for Busan Icons.

He then returned to England and had spells with QPR, Swindon, Colchester, Exeter and Leyton Orient, as well as a second stint at Norwich.

"He's still hungry and desperate to score goals and play in a good side," added Cheltenham manager Mark Yates.

"The first time I saw him I saw that desire in his eyes and he just wants to play every day. Everyone wants a good goalscorer and we've got one of the best ones in the league."