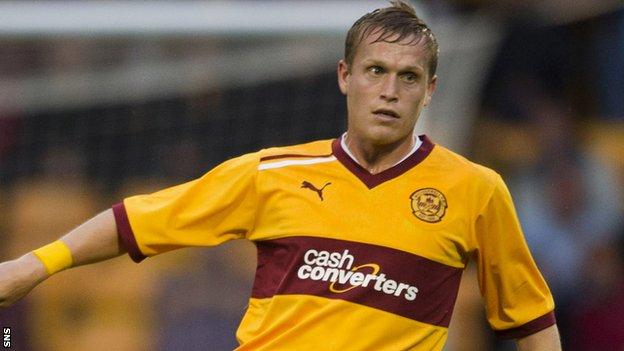 Motherwell defender Steven Hammell has been drafted into the Scotland squad for next week's World Cup qualifier in Croatia.

Hammell, who helped Motherwell finish second in the SPL this season, has earned one cap.

Aston Villa midfielder Barry Bannan has also been called into the squad.

"Barry Bannan would've been in the squad anyway, apart from the fact that he hadn't been playing. I've spoken to Barry at length; he feels fit, he feels ready and he's certainly excited about joining the squad.

"That's the sort of positive attitude we need."

Hammell made his international debut in a 4-1 friendly defeat by Sweden in 2004.

Forwards Leigh Griffiths and James Forrest, and midfielder Liam Bridcutt will be assessed on Saturday to see whether they are fit to travel.

Defender Gary Caldwell has already been ruled out having told BBC Scotland he will undergo hip surgery.

There is also doubt over Celtic captain Scott Brown's involvement as he continues to ease himself back from a hip operation, despite returning for his club side to feature in Sunday's Scottish Cup win at Hampden.

Strachan's side face two meetings with Croatia, one at home to Belgium and a trip to Macedonia.

And the manager has stressed that there is no "quick fix" to the national side's current problems.