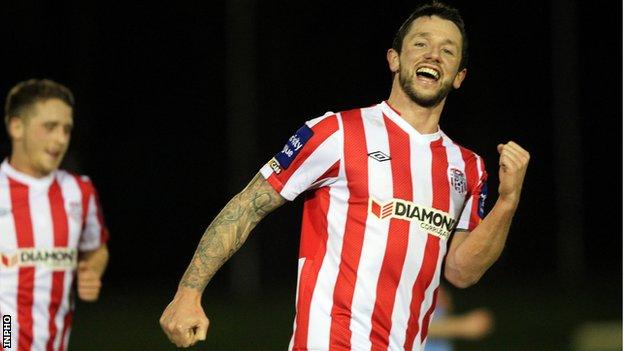 Rory Patterson bagged a hat-trick as four second-half goals eased holders Derry City into the third round of the FAI Cup.

Cork-based juniors Blarney defended well and it was not until the 53rd minute that Patterson headed the Premier Division side into the lead.

Ryan Curran followed up after a good save by United keeper Steven Gahan five minutes from time.

Patterson then scored two late goals to put some gloss on the scoreline.

That was a bit harsh on Blarney who had been well in the contest for most of the match.

In a low-key first half, Derry forward Michael Rafter volleyed over and Stewart Greacen was too high with a header from a corner.

The breakthrough came when Barry McNamee whipped in a cross and former Plymouth front man Patterson headed past Gahan.

Blayney, though kept fighting and had a couple of chances to grab an equaliser.

However, the tie was effectively over when Curran struck on 86 minutes. Keeper Gahan did superbly to save the first effort but was helpless when Curran made his second attempt count from about four yards.

Patterson pounced on a mistake by Gahan to make it 30- and then completed his hat-trick with a fine shot low into the corner.