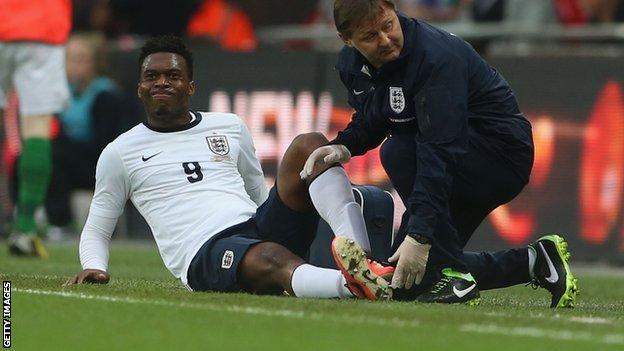 England striker Daniel Sturridge will miss Sunday's game in Brazil after suffering an ankle injury in the 1-1 draw with Republic of Ireland.

The 23-year-old Liverpool forward went off on a stretcher shortly after crossing for Frank Lampard's equaliser.

"He's not going to Brazil," said England manager Roy Hodgson. "He had a good start and we were sad to lose him.

"He hadn't played for a while and was carrying a slight injury. I fear it will keep him out for a few weeks."

Sturridge's injury on his first start for England further depletes Hodgson's attacking options after Andy Carroll pulled out of the squad with a heel problem.

Danny Welbeck was an unused substitute after missing training in the build-up to the Republic game because of a knee injury but will travel to Brazil, with Wayne Rooney and Jermain Defoe, who replaced Sturridge, the only other strikers available.

"We've got to hope that Welbeck will recover and Defoe will get fitter in the coming days," added Hodgson.

"It will be difficult to get someone in now so we will bite the bullet and accept that we are short up front and look at other options."