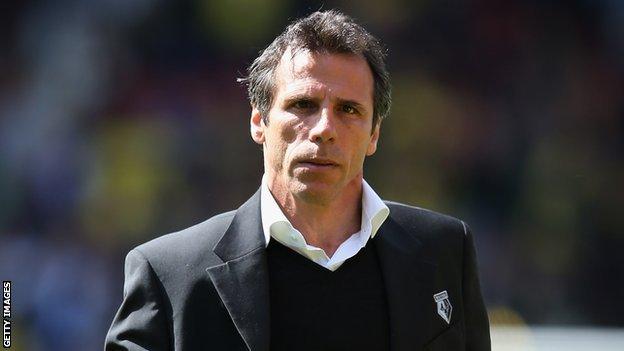 Watford boss Gianfranco Zola has said he will attempt to sign some of his 13 loan players permanently next season.

The Hornets will have to circumvent a transfer embargo and changes in the Football League's rules relating to foreign loans this summer.

"The ones we believe are good enough will stay here with us," Zola told BBC Three Counties Radio.

"We're going to make a stronger team. We will work on it because everyone deserves it."

Monday's Championship meant Zola was denied promotion to the Premier League in his first season in charge at Vicarage Road.

Last summer Watford were bought by the Italian Pozzo family, who also own La Liga's Granada and Serie A's Udinese, - including Championship player of the season Matej Vydra - from the two sister clubs. They went on to sign Fernando Forestieri permanently, while Jean-Alain Fanchone returned to Italy early.

Football League clubs are expected to vote in favour of capping the number of foreign loans next season, meaning the Hornets would have to make permanent signings.

The embargo has raised fears Watford could end up with just 14 professionals once all the loan players have left.

But it is understood that the Football League would allow the Hornets to sign players on a case-by-case basis, in much the same way Portsmouth formed a competitive side when they were under embargo last season.

There could also be an opportunity for Watford to sign players on 2 September, as the transfer window's usual closing date of 31 August falls on a Saturday and is therefore likely to be the following Monday.

All of these outcomes will mean Zola will be able to strengthen his squad for another push for promotion.

"This is the beginning. We're going to start working straight away," said the former Chelsea striker.

"This time we are going to be more prepared and I'm sure we're going to make the team stronger than this year.

"We know what we have to face next year."