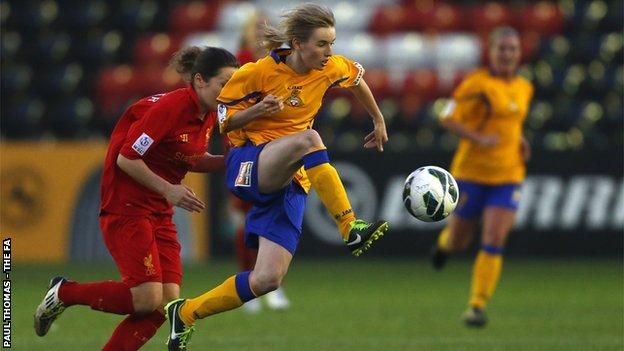 The Football Association's decision to drop Doncaster Rovers Belles into the second tier of women's football from next season is "morally scandalous", says the boss of a rival club.

The FA has decided Manchester City will replace the Belles in the top flight.

But Arsenal's general manager Vic Akers said: "Donny have the support of all the league's current clubs.

"I've spoken to all seven and we all feel what the FA has done is unjust - in my opinion it's morally scandalous."

The Women's Super League (WSL), which is run by the FA, will expand to two divisions from next season, with newcomers Manchester City Ladies joining seven other teams in FA WSL 1.

Having finished second from bottom in the first two WSL seasons, Doncaster will drop down a division to FA WSL 2 and compete against nine other sides.

But Akers, who along with Birmingham City chairman Steve Shipway represents the clubs on the WSL committee, said: "When they made their announcement, Donny had played only one match of the [current] season.

"To relegate them after 90 minutes is a joke - it's kicking them out.

"If you're talking about relegation then you should also talk about promotion, and Manchester City didn't win the Premier League [the level below the WSL], they finished fourth.

"Sunderland won it for the third year in a row and yet they'll be in the WSL's second division next year. It seems to me it's more about money than football."

Finance is one of several criteria, among them club structure, coaching set-up and playing standard, that the FA takes into consideration when handing out what are effectively WSL franchises.

The FA is making no comment about the situation surrounding Doncaster - the only club to have been continuously in the top flight since a national league system was formed in 1991 - until the club's appeal against the decision is completed, probably in early June.

Akers, who in 1987 founded the Arsenal women's team and as manager led them to prominence, added: "When we started, Donny were the premier women's team in the country. What's happening to them now is unjust."