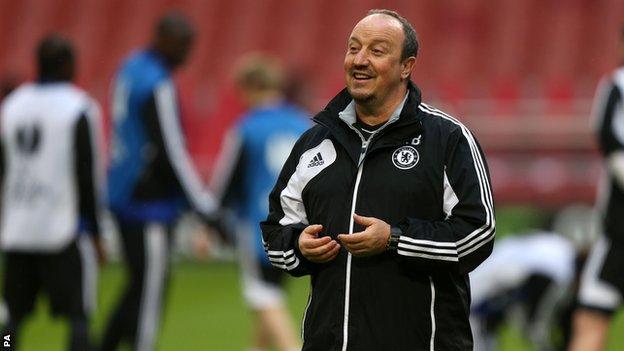 Napoli have appointed Rafael Benitez as their new manager on a two-year deal.

The 53-year-old's spell as interim Chelsea boss is coming to an end and he will replace Walter Mazzarri, who has joined Napoli's Serie A rivals Inter.

Napoli finished second in the Italian league last season and have qualified for next season's Champions League.

This season's Europa League win with Chelsea means Rafael Benitez has won 10 trophies as a manager:

"I am very happy and very satisfied for having committed to a great club with an illustrious heritage like Napoli," said Spaniard Benitez.

"I understand the history of the city and how the club forms a fundamental part of the culture and traditions of Naples.

"I must confess that I am extremely excited because I can share my passion for football with the fans of Napoli; it is proven that they are very, very special.

"I look forward to experiencing each and every one of the fans of Napoli and their strong support for this project that we will begin."

Napoli club president Aurelio De Laurentiis first made the appointment public when he posted a picture on Twitter of himself shaking hands with Benitez.

"Rafa Benitez is the new coach of Napoli," he tweeted. "A man of great international experience. A leader."

The Spaniard twice won La Liga with Valencia, while also leading the club to a Uefa Cup victory.

He then spent six seasons in charge of Liverpool from 2004 and guided the Reds to Champions League glory in 2005 as well as the FA Cup in 2006.

Benitez parted company with the Anfield club in June 2010 before taking over at Inter Milan a week later - a post in which he lasted just over six months, despite a Club World Cup success.

Following nearly two years out of club management, he took over as interim Chelsea boss in November 2012.

Benitez guided the Blues to the Europa League trophy this season, while a third-place finish in the Premier League ensured the Stamford Bridge outfit would play in the Champions League next season.

He also led Chelsea to the final of the Club World Cup - where they lost to South American champions Corinthians - and the semi-finals of the FA Cup and League Cup.

Despite a season widely regarded as a success, Benitez remained unpopular with a section of the Chelsea support after succeeding Roberto Di Matteo in November and had underlined his intention to leave the club at the end of the season.

The Spaniard was linked with the vacant roles at Everton and Stoke after announcing he would be leaving Chelsea, who are expected to re-appoint former manager Jose Mourinho this summer, after the Portuguese's departure from Real Madrid was confirmed.

A Blues statement read: "Everybody at Chelsea Football Club would like to place on record our thanks to Rafa and his staff for their work at the club, and wish them success for the future."

583 comments
Back to top
unknown