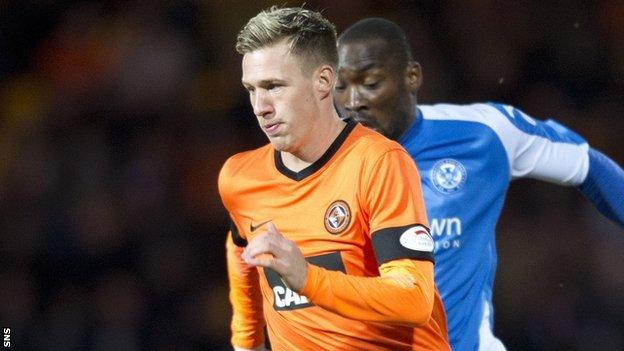 Lech Poznan have completed a deal to sign defender Barry Douglas, who is leaving Dundee United.

The 23-year-old left-back has agreed a two-year contract at the top-flight club, with an option of extending that by another year.

Douglas told Lech's website that he had asked United's Polish keeper, Radosław Cierzniak, about football there.

"His views were positive, but I wanted to see it for myself," said Douglas.

"I was at the game with Widzew Lodz and I loved the atmosphere in the stands."

It is believed that United manager Jackie McNamara was keen to retain Douglas' services.

But it appears that the Tannadice club were unable or unwilling to match the terms being offered by the Polish outfit.

Lech have qualified for European competition next season, having guaranteed the runners-up spot - two places better than last season's finish.

With two games remaining, they are 11 points clear of Slask Wroclaw, who knocked Dundee United out of last season's Europa League qualification stages.

Lech are six points behind Legia Warszawa, but their rivals have already been crowned champions because of a better head-to-head record.

"You can see that in Poznan they like you to play football and they will be playing in the European arena," added Douglas.

"I wanted to try something new and it seemed to me an interesting proposition."

Douglas switched to Tannadice from Queen's Park in 2010 and had become a first-team regular with the Scottish Premier League side, making 34 appearances this season.

He travelled to Poznan on Monday and became the latest summer departure from Tannadice after a successful medical.

Jon Daly has already been unveiled as a new signing by Third Division champions Rangers, while chairman Stephen Thompson is looking to .

McNamara, who took charge in January, has promised a number of personnel changes this summer.