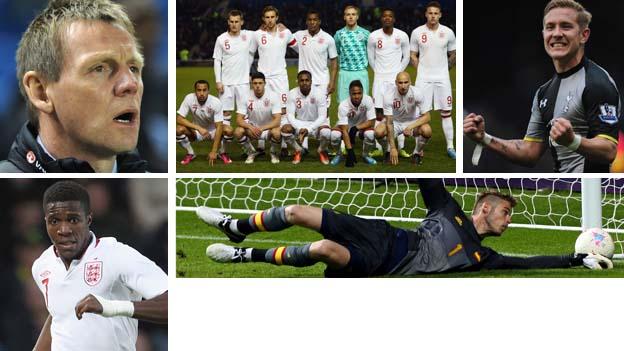 They are just a few of the internationals who have graced previous Uefa European Under-21 championships.

On Wednesday, the 2013 tournament gets under way in Israel with the Premier League, La Liga, Bundesliga and Serie A all represented among the eight teams.

The final will be held in Jerusalem on 18 June.

Stuart Pearce takes charge of England's Under-21s for a fourth successive tournament, and his young Lions head into it in superb form.

They have won their last nine matches, during which time they scored 22 goals without conceding, and topped their qualifying group with seven wins from eight matches before beating Serbia in a controversial two-legged play-off.

England, seeking a third Under-21 title to go with the trophies they won in 1982 and 1984, begin their Group A campaign against Italy in Tel Aviv on 5 June, before taking on Norway three days later and the hosts on 11 June.

Pearce has come close to masterminding victory before, having lost the 2009 final to Germany and being knocked out on penalties in the semi-final two years before that by the Netherlands.

He believes those experiences will help this summer.

"If I roll the clock back and look at my preparation three tournaments ago, I was unsure in my own mind of what worked and what didn't," he told TheFA.com.

"I now know full well what is the right thing to do as I've seen the results of getting the balance between rest and focus."

Players are eligible for the tournament if they were born on or after 1 January 1990.

The Wigan winger misses out because of an ankle injury, while Liverpool wideman Raheem Sterling will not play because of a thigh problem.

"The importance of the whole squad, not just one to 11, but 12 to 23, they are the most important players you have," Pearce added.

He said the tournament also serves as ideal preparation for the senior international set-up.

"It's good to look back and see the development of where certain players have gone.

"If someone had said to me Ryan Bertrand would be a Champions League winner, Phil Jones and Chris Smalling would have gone straight into the full England squad, [Kyle] Walker, [Danny] Welbeck, [Daniel] Sturridge and various other players who have gone on to achieve things, I'd have thought 'yeah, great'.

"You hope that in two years' time after this tournament, we're going to have the same number of players who go on to the seniors having developed a great understanding of tournament football."

Spain are favourites to retain the crown they won in 2011, having named an experienced squad.

Manchester United goalkeeper David de Gea, 22, is one of five players in the 23 who helped Spain lift the trophy in Denmark two years ago.

Spain, who have won the competition three times, topped their qualifying group with seven wins from eight matches and then thrashed Denmark 8-1 in a two-legged play-off to secure their place.

"This tournament is a very attractive one and contains some really big names. The feelings are very positive," said coach Julen Lopetegui.

"The three national teams we will face in the group stage are all very competitive and contain players with a lot of experience who have featured for their seniors. We have a wonderful challenge ahead of us."

Another side expected to do well are the Netherlands, who are aiming to secure a third Under-21 title.

"That is the goal," said coach Cor Pot. "Otherwise, we would not even bother travelling there. To say that we are expected to become European champions is overstating it a bit.

"We are certainly candidates, but nations like Spain, England, Italy and Germany also have strong squads. We certainly must not underestimate them. We will have to battle hard for it in Israel. The players will gain huge benefits from the tournament experience they will have."

Having failed to qualify for the 2011 finals after losing in the play-offs against Belarus, five-times champions Italy were careful to avoid any mistakes this time around.

They started Group Seven with five consecutive wins and lost only once - 4-2 at home against Republic of Ireland - when they had already booked a place in the play-offs.

The original trophy, which is used for the official presentation ceremony at the final, remains with Uefa at all times, but a full-size replica is awarded to the winning association.

They then beat Sweden 4-2 on aggregate under new coach Devis Mangia.

Full internationals Marco Verratti, from Paris St-Germain, and AS Roma forward Mattia Destro have been included in the squad.

Tottenham's Lewis Holtby has been confirmed as Germany's captain and the 22-year-old midfielder is one of only two players in Rainer Adrion's squad to ply his trade outside of his homeland.

The other is former Everton defender Shkodran Mustafi, who joined Sampdoria on a free transfer from the Toffees last summer.

He was one of Germany's key players in their qualifying campaign.

He moved to Tottenham in January 2013 for around £1.5m from Bundesliga club Schalke and earned his first Germany Under-21 cap in 2009.

The Brazilian-born Spanish striker topped the goalscoring charts in the qualifying campaign.

He notched 11 goals in nine appearances, including four in the play-off first leg 5-0 demolition of Denmark.

The 22-year-old moved to Benfica from Real Madrid in 2010 before spending the whole of the 2010-11 season on loan at Bolton Wanderers, where he scored once.

Since returning to the Portuguese giants, he has become a regular first-team member, scoring eight goals in 30 appearances this season.

The Borussia Moenchengladbach striker, who has seven senior international caps, was part of Netherlands' Euro 2012 squad but did not make any appearances.

The 22-year-old moved to Germany in July 2012, after scoring 39 goals in 76 league games for FC Twente in Holland.

His only appearances in the qualifying campaign came in the two-legged play-off win over Slovakia, when he appeared in both games and scored one goal.

The Euro 2012 joint top scorer, 22, has been included in the squad despite being unavailable for the first game on 6 June.

The CSKA Moscow midfielder - one of six players to score a tournament-leading three goals 12 months ago in Poland and Ukraine - has also been selected in Russia's senior squad preparing to play Portugal in a key World Cup qualifier on 7 June.

He will then link up with the Under-21 squad with the aim of being ready for Russia's second Group B fixture against the Netherlands on 9 June. Dynamo Moscow striker Kokorin and Anzhi Makhachkala's Oleg Shatov will also make the same journey.

The 20-year-old winger completed a £15m move to Manchester United from Crystal Palace in January before returning on loan to help the Eagles into the Premier League through the play-offs.

Zaha made his England senior debut in a 4-2 friendly defeat by Sweden in November.

He scored twice in the Championship play-off semi-final against Brighton and won the penalty in the final against Watford, which Kevin Phillips scored to secure the Eagles their lucrative ticket back into the top flight.

Just a glance at some of the players to have starred at European Under-21 championships is evidence of the quality and significance of the competition.

Chelsea's Juan Mata helped Spain's youngsters win the title in 2011, before stepping up to play a part in the senior team's Euro 2012 success.

Other players to have won Uefa's golden player award - given to the player of the tournament - include Italy's Andrea Pirlo, Chelsea's Petr Cech and Rudi Voller for Germany.

"It is a great tournament with the potential of giving players for the future that window to impress," said Blackburn midfielder David Dunn, who represented England Under-21s in the tournament in 2000 and 2002.

"In both tournaments I played in, Pirlo played for Italy. At the time you just think he is another player - it is only later you realise how good a player he actually was.

"Obviously there is a massive gulf between this level and full internationals but many of the players who play in it will be on the senior international stage before long. It is a good grounding."

The format of the tournament has changed throughout the years but its purpose has remained the same - to provide a stepping stone to the full international stage.

It began in 1976 and, after being an eight-team knockout tournament in 1998, adopted the current group format for the first time in 2002.

In 2007 the event, held every two years, was switched to odd years to avoid clashing with the senior European Championship and World Cup.

"In 2000, I was in the same squad as the likes of Frank Lampard and Jamie Carragher. In 2002, players like Jermain Defoe, Matthew Upson and John Terry were in it," said Dunn, who was captain for that campaign.

"All the managers and coaches will be keeping a close eye on how the players can handle the big games.

"I am sure every player involved will believe this is part of a long international career. I guess that is why it exists, to help develop the international stars of the future."