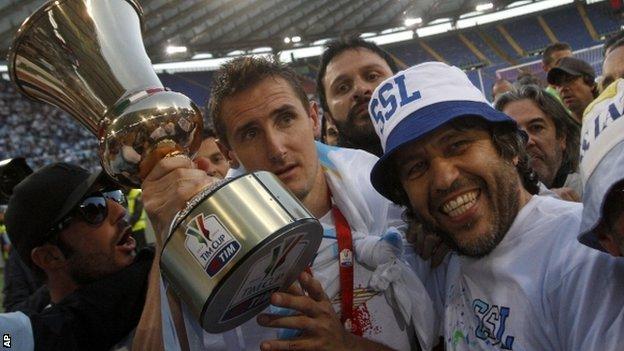 Lazio won the Coppa Italia for the sixth time with a narrow 1-0 win over fierce rivals Roma at Stadio Olimpico.

Roma's best chance to equalise came when Francesco Totti's free-kick was deflected onto the crossbar.

Goalscorer Lulic said: "This victory won't be forgotten. I found myself there in the right moment. I dedicate this goal to my wife, who is pregnant."

Victory for Lazio, who ended the season seventh in Serie A, means they qualify for the Europa League group stage

Lazio have now won four of the last five Rome derbies, with the other result a 1-1 draw in April

It also continues their recent good record in derby games against their Rome rivals, who miss out on European football next season despite finishing one place higher in the league.

Chances were rare in a scrappy match, with Lazio dominating in the first half but failing to make their superior possession count.

Miroslav Klose had their best effort before the break when his powerful close-range header brought a superb save out of Lobont, but Roma threatened soon after when Mattia Destro nodded wide from Marquinho's cross.

Lazio should have taken the lead after 67 minutes when Stefano Mauri nodded Lulic's cross into the path of Klose in front of goal, but he failed to make contact from three yards out.

However, only three minutes later Bosnia midfielder Lulic struck from close range when Lobont could only tip Candreva's cross into his path.

In response, Roma poured forward but, aside from a goalmouth scramble after Totti's free-kick hit the woodwork, they created little.