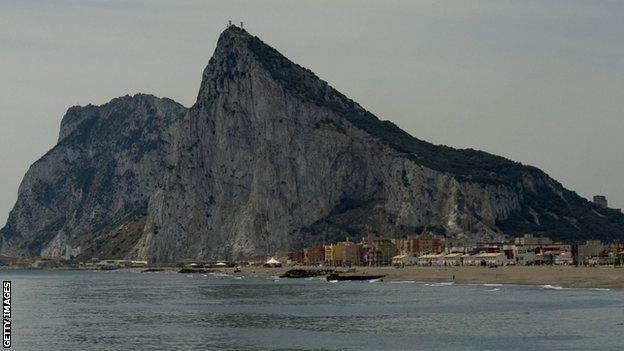 Gibraltar has been accepted as a full member of Uefa, European football's governing body.

The application was approved on a majority vote at the organisation's congress in London, with no votes against and no abstentions.

The British Overseas Territory off the south coast of Spain has a population of just under 30,000.

Gibraltar will be allowed to enter qualifying for the 2016 European Championship.

The territory tried to join Uefa in 2007 but the bid was controversially rejected. Spain opposed the move and threatened to boycott both club and international competitions if it succeeded.

Only three of Uefa's 52 associations voted in favour of Gibraltar - the English, Welsh and Scottish Football Associations.

Previously Gibraltar, which has six top-division teams and 600 registered senior players, had been told it could not join Uefa as it was not a country recognised by the United Nations.

It was accepted as a provisional member of Uefa in October 2012 and that membership has now been ratified.

Spain continues to claim sovereignty over the territory, which has been ruled by Britain since 1713 under the terms of the Treaty of Utrecht.

The European Union has put pressure on Spain and Britain to resolve the issue of Gibraltar's status. Both sides, under the Brussels Process launched in 1984, have attempted to reach an agreement.

But Spain's insistence on eventually acquiring full sovereignty, and Britain's determination to retain full control of Gibraltar's military base, have been among the stumbling blocks.

Uefa president Michel Platini has confirmed that Gibraltar and Spain will be kept apart in qualifying groups.

"Gibraltar will not play qualifying matches with Spain - we also have this situation with Armenia and Azerbaijan," Platini said.

"This is a momentous occasion for football in Gibraltar. Uefa membership means that we can begin the next chapter of Gibraltarian football," the president of the Gibraltar Football Association, Gareth Latin, said.

"At last we'll be able to show the whole of Europe that we can match the best with football of a high standard and entertaining style."

Allen Bula, head coach of Gibraltar's national side, would relish the chance to play the country's neighbours.

"I always said I would love to play Spain. I would play them any day, anywhere, any time," Bula told the BBC's World Football programme earlier this year.

"When I took over the national team I had one purpose - to show Europe and the world that what Spain were saying about us, that we were only in it for political reasons and that we didn't have any quality, was a load of rubbish.

"They have not let us progress, we've never given up and now we are ready to show Europe what we are made of."

Gibraltar becomes the smallest Uefa member in terms of population, behind San Marino (just over 32,000), Liechtenstein (approximately 37,000) and the Faroe Islands (just under 50,000).