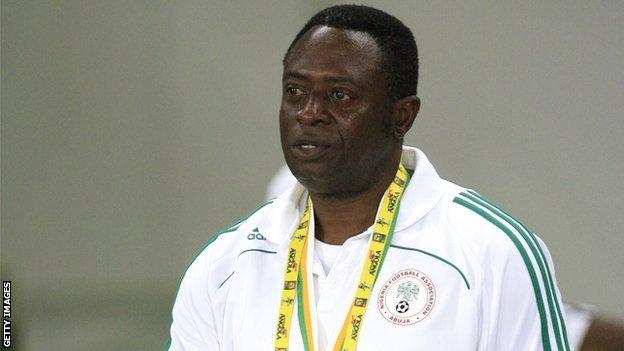 Nigeria's technical director Shaibu Amodu insists that the Super Eagles' main target should be qualifying for the 2014 World Cup, rather than trying to win next month's Confederations Cup.

The African Champions will face Tahiti, Uruguay and Spain in Brazil in the June tournament which doubles as preparation for the South American country for the hosting of next year's World Cup.

But Amodu, who was in charge of the Super Eagles when they finished fourth in their maiden Confederations Cup appearance in Saudi Arabia in 1995, told BBC Sport: "What's the point in winning a World Cup dress rehearsal and missing out on the big party next year?

"The World Cup is a crucial one for the country. For us, it is the most important tournament.

"The fans and media expect Nigeria to win the Confederations Cup, but it is less important to the team and country to be honest."

The Super Eagles are level on points with Malawi at the top of their World Cup qualifying group and face away trips to Kenya and Namibia next month.

Amodu wants to ensure the team is focused on those matches.

"There are tricky games ahead in the World Cup qualifiers and one slip can easily change the complexion of the group," he said.

"Every game now is a cup final for them and people should stop piling undue pressure on the team."

Amodu's comments seem to conflict with the view of coach Stephen Keshi, who told BBC Sport after the Nations Cup success in South Africa that playing at the Confederations Cup was his main target.

"While preparing the team, I had my eyes set on Brazil," he explained.

"I was confident we would get there but my players felt I was drunk or acting like a comedian - now they believe."

Amodu wants Keshi and his players, who are thrilled by the prospect of competing against some of the world's best teams, to put the tournament into perspective.

"Yes, it is good to test yourselves against some of the best teams in a competitive level but it is not a competition to prepare the Super Eagles for better assessment," he said.

"When you qualify for the World Cup, which is on a global stage and biggest tournament in the Fifa calendar, you will come face to face with the best teams from around the world.

"Kenya, Malawi and Namibia all want to stop Nigeria, we should focus our energy on beating them and secure a ticket to play in 2014.

"No-one remembers who won the last Confederations Cup because the World Cup quickly erases everything. That is how big and important it is."