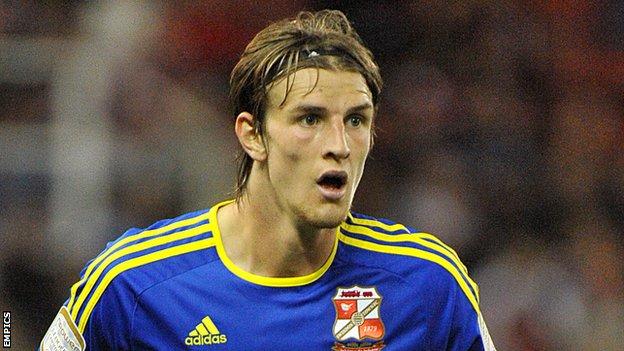 Last week, the Robins took up an option on Flint's contract which would keep him at the club for next season.

But the 23-year-old put in a transfer request - which was turned down - after the club dismissed the offer from City.

The bid is believed to have fallen some way short of Swindon's valuation of the centre-back.

Bristol City boss Sean O'Driscoll confirmed to BBC Radio Bristol: "We've put an in offer that got rejected, so we're just contemplating whether we increase the offer or look elsewhere.

"He'd be somebody we feel that would fill the right centre-half gap that seems to have been a problem since Steven Caulker left. He's a good age and someone we think we can develop further."

In January, Flint caught the attention of League Cup runners-up Bradford, promoted to League One last weekend, only for their offer to be rebuffed by Swindon.

The former England C international has made a total of 79 appearances for Swindon since joining from non-league outfit Alfreton Town in 2011, and was an integral part of their League Two promotion-winning side in 2012.

As well as a centre-back, O'Driscoll is on the lookout for a new goalkeeper after Dean Gerken was released and Tom Heaton joined Burnley.

However the former Doncaster and Nottingham Forest boss insists he will not be rushed into a making a quick decision.

"We've just got to be careful that we don't rush into things," added O'Driscoll.

"That's a key position, and we've got to make sure the person we bring in is right. This is the time of season where you can make really good signings or really expensive mistakes."