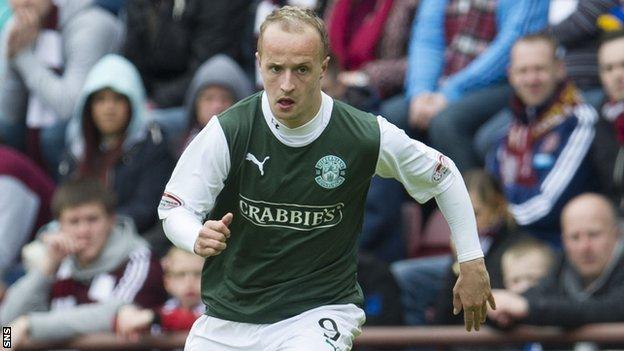 Hibernian's top scorer Leigh Griffiths has been recalled to the Scotland squad for next month's World Cup qualifier against Croatia.

Scott Brown, Craig Conway, Lee Wallace and Steven Whittaker return to the squad for the game on 7 June in Zagreb.

Scotland are already out of the running for next summer's finals in Brazil.

However, Strachan's side need to at least double their tally of two points in Group A to preserve their status in the fourth pot of seeds for future qualification campaigns.

Griffiths, who has scored 28 goals this season on loan from Wolves, made his senior international debut as a substitute against Luxembourg last year.

"Over the last couple of seasons he has decided he wants to improve and get better and he has done that," said Strachan of Griffiths.

"People can help you on your way to become better but your career is entirely in your own hands. At this moment he is shaping a good career.

"He was unfortunate, he was very close to being in the squad the last time. This time he has achieved that."

Brighton defender Greer, 32, has previously been capped by Scotland B.

Dundee United midfielder Armstrong, Aberdeen youngster Jack and Celtic forward Watt graduate from the Scotland Under-21 ranks, while United winger Mackay-Steven has previously been in the senior squad.

Watt scored twice on his Celtic debut in April 2012 and gained further notoriety when his goal against Barcelona in a November Champions League match proved to be the winner.

Cardiff's Conway last featured for the Scots against Cyprus in November 2011.

Strachan indicated that Celtic duo Kris Commons and Charlie Mulgrew were being left out to give them some rest, while Vancouver Whitecaps striker Miller is struggling with a hamstring injury.

"Charlie and Kris have played a lot of games this year for Celtic," said the manager.

"Charlie Mulgrew is not going to be there because he's getting married."

As well as the loss of the experienced Miller, the Scotland coach also has to contend with the long-term absence of national captain Darren Fletcher and Sunderland forward Steven Fletcher.

There are no places in the squad for Charlie Adam, Christophe Berra, George Boyd, Graham Dorrans or Ross McCormack.