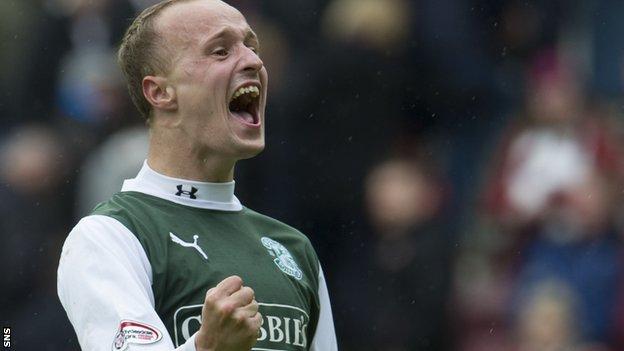 It has already been a memorable campaign for Leigh Griffiths, with the striker equalling a Hibernian goal-scoring record of 27 years, making his Scotland debut and picking up three major end-of-season awards.

Surely it would be greedy to expect any more.

But all the best forwards are possessed with a rapacious appetite and the 22-year-old is desperate for success in the Scottish Cup final in what could be his farewell performance for the Edinburgh club.

"It's not been a bad season at all and hopefully I can cap it off with the winning goal on Sunday," he told BBC Scotland.

"I'm equal with Stevie Cowan's record of 28 for a season, so I'd like to go at least one better."

Hibs slumped after an excellent first four months of the campaign to end up in the lower half of the Scottish Premier League.

But Griffiths has maintained his high standards throughout, firing in a hat-trick at Kilmarnock and a double in the remarkable semi-final success against Falkirk on the road to Hampden.

And what makes it all the more impressive is that he has done so without a great deal of support in attack, although he is at pains to differ.

For a large chunk of the season, Griffiths has foraged as a lone front man, but he is quick to praise the contribution of others.

"I don't get my goals if I don't get help from my team-mates," he explains. "Every goal scored is through hard work from the team."

The emergence of exciting winger Alex Harris, who did much to help Hibs recover from 3-0 down against Falkirk at Hampden, has seen more ammunition come the way of Griffiths.

That incredible second-half comeback also saw the Easter Road side switch to a twin-pronged strike force and has been rewarded by sticking to that policy with two draws and three wins to close out the league campaign in seventh spot.

"It's always nice to play with a partner; you can work off him," admits Griffiths.

"But if the manager decides to go with one up and chooses me then I'll do my best."

Ross Caldwell is another teenager that has taken his chance in recent weeks and scored a marvellous winning goal against Hearts to further endear himself to fans.

"Even though he's young and still developing, his hold-up play is great," says Griffiths of Caldwell. "He's a big, strong lad and he holds off the defenders well."

And then there is Eoin Doyle, who linked well with Griffiths over the opening months of the season and did so to great effect as substitute in the semi-final.

"Doyle has great movement, he reads the game very well and is an intelligent player," adds Griffiths, who netted the only goal when Sunday's opponents, Celtic, visited Easter Road in December.

"It will be a big shock if we can beat them, but we are capable - if we go about our business the right way."

Scotland's football writers and the , while he was voted the .

was made following the latter awards ceremony, but it was not Griffiths, who has displayed a new maturity on the park this season after a few foolish moments in the previous campaign.

One place, however, he has not put this new cool head to use is to find the back of the net since not one of his many goals has come directly from his noggin.

He doesn't really do tap-ins either, with several outstanding strikes to his name.

"I said I was going to get one with my head on Saturday, but I never got on the end of any crosses," he jokes. "Maybe I can leave it until the last game."

And it could well be his farewell in green and white after two campaigns on loan from Wolves.

The Midlands club, relegated to League One and without a manager, have .

"I'll be going back down, but I'm doing everything I can to stay," he explains.

"I just need to bide my time. If it happens, it happens - I'll be absolutely delighted.

"If it's not to be then this will be my last game for Hibs.

"And I don't think there could be a better send-off than collecting the Scottish Cup."