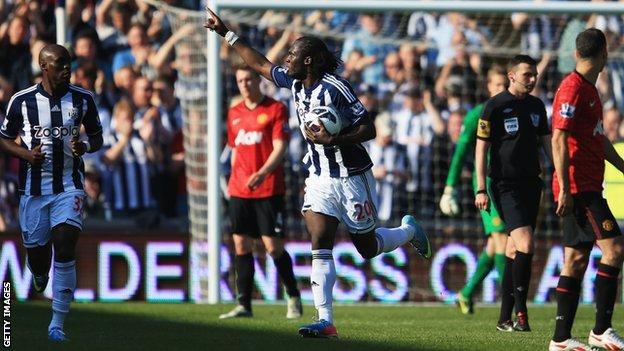 West Bromwich Albion loan star Romelu Lukaku says his future at Stamford Bridge depends on whoever is chosen as the next manager of Chelsea.

Lukaku, 20, has not ruled out returning to Albion if things do not work out for him this summer back at Chelsea.

"I have to see," Lukaku told BBC WM. "I have to talk with the new manager.

"Chelsea are still my dream club and I want to be successful there. If the new manager has plans for me, I will go there and take my chance."

Having first predicted that he would play for the club on a school visit to Stamford Bridge in 2009, he was signed by then Chelsea boss Andre Villas-Boas from Anderlecht as a teenager in August 2011.

He is yet to break his duck for the Blues, having failed to score in 12 appearances in his first season - all but one of them off the bench.

But Albion's leading marksman certainly gave the next incumbent to the Stamford Bridge hot-seat something to think about by departing The Hawthorns with a second-half hat-trick in Sunday's 5-5 draw against Manchester United.

In Sir Alex Ferguson's final game in charge, Lukaku achieved the unique feat of becoming the only player in the long-serving United manager's 26-and-a-half-year reign to fire a treble against the Red Devils and not end up on the winning side.

"It might have been a match without much riding on it, but Steve Clarke still deserves credit for a bold decision to go for it at 2-5 down. He could have tried to limit the damage - there was a danger Albion might have been humiliated by conceding eight or nine - but Clarke urged his team forward, with memorable results.

"Whatever colour shirt Lukaku is wearing when he next plays at The Hawthorns, he is assured of a hero's welcome. Skilled on the ball, and strong as a bull, he grew in confidence and composure as the season went on. Could the next Chelsea manager really decide he could manage without Lukaku for a year? No way, Jose, you would think, but Albion fans would love to see him back in August."

"It was a great game," added Lukaku, whose treble came within a week of celebrating his 20th birthday. "Offensively great, defensively a little bit less.

"It was the first hat-trick of my career and to do it against Man U makes it special.

"I pray to God it is the first of many for me."

Lukaku admits that his season at The Hawthorns, in which he finished the sixth-highest Premier League top scorer on 17 goals - outscoring Demba Ba, Frank Lampard, Juan Mata and Fernando Torres - came at an ideal time, given all the upheaval at Chelsea over the last two years.

"West Brom really launched my career," admits the Belgian striker. "I've enjoyed myself here and I hope they enjoyed me.

"Chelsea was a bit difficult and a lot of people were doubting me but I kept believing in my qualities. I work hard and, with the help of the fans and the club, I just could not fail here.

"All I am doing now is just keeping my head on my shoulders. I will concentrate on my next international games with Belgium, go away on holiday, then come back for pre-season training and we will see what happens."