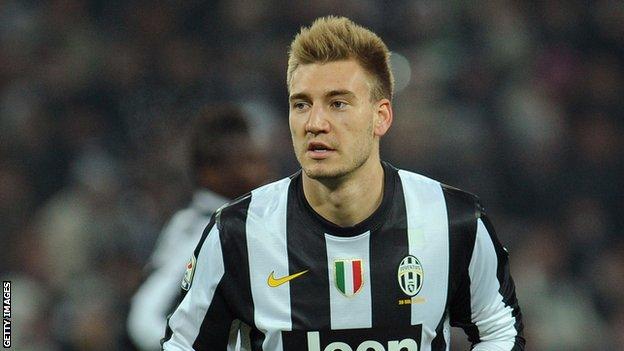 Arsenal striker Nicklas Bendtner has undergone an operation on the fractured wrist he suffered playing for loan side Juventus on Saturday.

Bendtner, 25, picked up the injury in the final minutes of the Italian champions' 3-2 defeat at Sampdoria.

The Danish international has failed to score in his 11 games for Juventus.

Talking about the result, head coach Antonio Conte said: "It's a pity only for the 100th injury of Bendtner, who has really had an unlucky season."

Bendtner has endured a disappointing spell since he joined Juventus on a season-long loan at the end of August.

After initially struggling to break into the team, he suffered a serious thigh injury in December.

While out of action, he was arrested for drink driving in March after being caught driving the wrong way down a street in Copenhagen, Denmark.

For that incident, he was fined 842,000 Danish krone (£97,200), had his driving licence suspended for three years and was banned from the national team for six months.

Bendtner was making his first appearance of 2013 on Saturday and came on as a 74th-minute substitute, but then suffered the fractured wrist when he landed heavily following a challenge.

The defeat for Juventus at Stadio Luigi Ferraris came on the final day of the Italian top-flight season.

Bendtner came through the youth system at Arsenal and broke into the first team in 2005, but has struggled to hold down a regular place in Arsene Wenger's side.

He has scored 45 goals in 157 games in all competitions for the Gunners, although he has only made one substitute appearance for Arsenal in the last two seasons.

He spent the 2011-12 campaign on loan at Sunderland, scoring eight Premier League goals in 28 matches, before joining Juventus last summer.