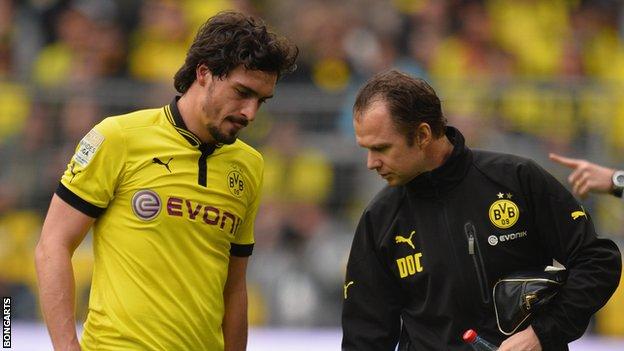 Borussia Dortmund believe it is "absolutely realistic" that centre-back Mats Hummels will be fit for Saturday's Champions League final.

Hummels, 24, limped off at the weekend against Hoffenheim, putting his Wembley place against Bayern Munich in doubt.

But Dortmund's team doctor has eased those concerns by revealing Hummels has only suffered a sprained ankle.

"Obviously, we'll give him all the time in the world to get fit," Bayern sporting director Matthias Sammer said. "We're optimistic. I'm confident he'll be back, stronger than ever."

Badstuber, who has been capped 30 times by Germany, suffered a fresh tear in the ligament in his right knee while undergoing rehabilitation.

He will have an additional operation and will be out of action for at least another six months.

The 24-year-old defender originally suffered the problem in the Bundesliga meeting with Dortmund in December.

For Dortmund, the news about Hummels's availability is another boost after head coach Jurgen Klopp said last week that playmaker Mario Gotze should be ready for the all-German decider with his recovery from a thigh problem "going according to plan".

The 20-year-old, who will join Bayern for £31.5m in the summer, has not played since being injured in last month's semi-final second-leg meeting with Real Madrid.