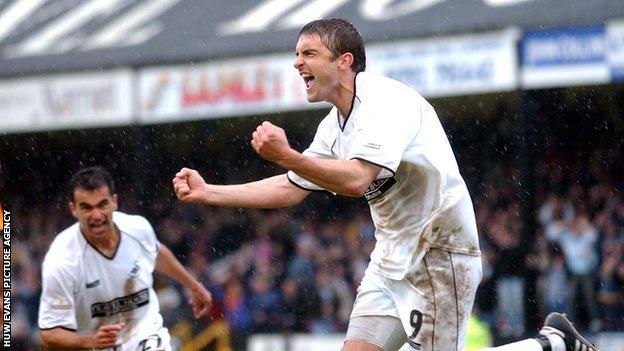 That was how producer Craig Withycombe and I sold the idea to the BBC Cymru Wales programme commissioners about making a documentary on Swansea City's incredible rise from the bottom of the Football League to the Premier League in the space of a decade.

Tower Colliery was the last deep pit in Wales, which was closed and brought back to life by a workers' buyout.

It may sound melodramatic, but the Swans' success is a tale which is so inspiring that they're talking about a Hollywood film being made about it.

It has been an idea which has lingered in the BBC Wales sport department for quite some time but the problem with all the club's success has been when to tell the story.

Not wishing to hope for a plateau in the Swans' success, but after the Capital One Cup final win and confirmation of a top 10 Premier League finish this term, it was felt by us that things couldn't get much better for the club.

Bearing in mind the past season marked Swansea City's centenary as well, the stars aligned and 'The Fall and Rise' idea was born. 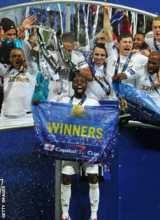 "At a time when English football's Premier League is dominated by billionaires and oligarchs, there is a fan-owned club competing with the best"

In a personal capacity, working on the programme was a treat. As a football reporter for BBC Wales this past decade I've been as close as anyone in observing their success.

I was there for each of their last three promotions and the League Cup win. I was there for the dark times too - so remember first hand what the supporters had been through.

Of course, the football side to the story is rags to riches stuff in itself - club goes from near bankruptcy to the top league - but what we found when making the programme is that tells only half the tale.

In truth, this is a human interest story and an emotional rollercoaster ride for anyone with a nodding acquaintance with Swansea City.

In 2001, a group of local people and the newly-formed Swansea City Supporters Trust joined forces to take control of their beloved club from an owner whose decision to cut costs by sacking players met widespread dismay in Wales' second city and, for that matter, the wider football community.

Suffice to say quite a bit of progress has been made since the days of the unpopular Tony Petty and it's all down to the fans in the boardroom.

Learning to run a football club is one thing. Turning it in to a multi-million pound business is another, making the achievement a marvellous one.

There are glorious football tales to be told along the way - in the documentary you'll hear from James Thomas, the reluctant hat-trick hero whose goals saved Swansea from relegation to non-League football in a win or bust game

Thomas now watches from the stands of the Liberty Stadium as a season-ticket holder (his favourite pastime away from a job as an ambulance driver in Port Talbot).

Leon Britton - one of the first signings made by this board of supporters - still plays in midfield, choosing to be loyal to the club which took a chance on him. He told us his story at the club and his hilarious first impressions of it.

And what about the owners themselves? This eclectic group of builders, accountants and carpet salesmen currently deal with million-pound contracts and recruit world-class footballing talent.

Ten years ago, they were learning as they went along. As vice-chairman Leigh Dineen put it when they first bought the club: "Right, what do we do now then?"

Then there are the fans. They'd experienced years of mediocrity and farce (seasoned fans will remember the seven-day reign of former Cradley Town youth manager Kevin Cullis).

Each supporter we interviewed had a story, one man even losing his job not to miss a game. But, as the editing process went along, we found the story of married couple Anne and Nigel Gigg was compelling enough to, at times, drive the narrative of the programme.

From their joy over the glamorous 1980s football enjoyed at Swansea under then manager John Toshack, to the tears they shed when the club faced Hull City, where they had to win to stay in the Football League.

I've suggested to Anne and Nigel they record the programme as it's a small slice of their family history!

But don't worry you hardened football fans, there's plenty of goals and match action as well as all that sentimental stuff.

At a time when English football's Premier League is dominated by billionaires and oligarchs, there is a fan-owned club competing with the best of them.

Swansea City, football's 'Tower Colliery'. It was a privilege to help tell the triumphant story.