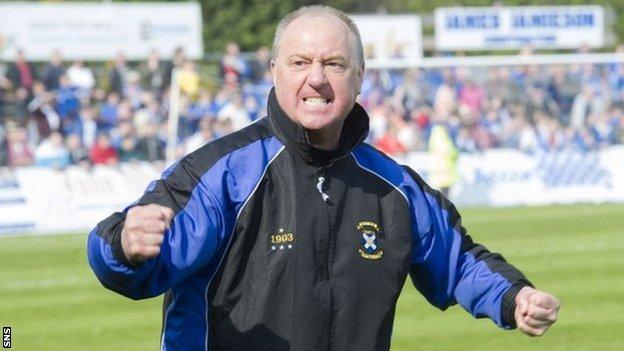 Billy Brown led his East Fife side to safety from relegation with a play-off final win over Peterhead then cast doubt about his future as manager.

The Fifers beat Peterhead at Balmoor Stadium thanks to after a goalless first leg.

"We'll have to talk to the chairman about that," said Brown, who recently had a well-publicised rant at some fans, when asked if he will be staying.

"The atmosphere changed at Bayview the last three or four games. It's great."

The former Kilmarnock assistant took over in November and finishing in second bottom place in Division Two meant a play-off against one of his former clubs, Berwick Rangers, then Peterhead from the league below.

"Whatever happens, the board and the chairman here have been absolutely outstanding," Brown said of his own future.

"They are good people, their hearts in the right place and I'm just glad I'm not going to have to listen to them on the bus for the next three or four weeks at least."

The 62-year-old was delighted that the play-off process was over.

"It's great and it's a relief," he told BBC Scotland. "I didn't enjoy the play-offs - I hope I'm not involved with them again.

"I don't say it's not exciting. But, to be in the dugout, I'm maybe getting too old for that."

Brown praised his players for beating a side who had won 10 straight games before the two-leg play-off.

"It was tight," he said. "We're talking about a team that are relentless.

"They just bang everything forward and it's really difficult to play against and they've got the right type of players for that system and all credit to them, they are a good team.

"But I thought that the way we defended, we've not defended like that very often.

"If we defended like that, we might have been second top of the league never mind second bottom of the league.

"But we'll take it. We got one or two breaks as well that we've not had this season.

"All credit to the club, they kept going.

"This was a really difficult tie for East Fife and we've come through it without losing a goal."