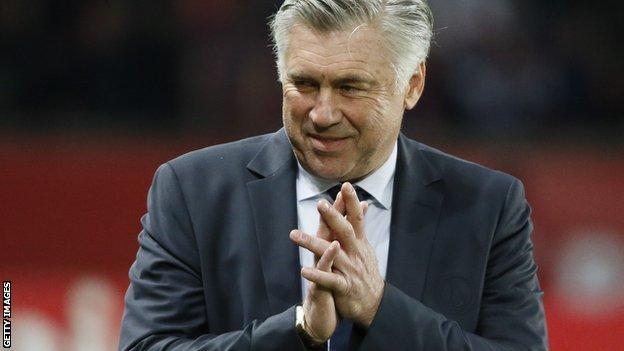 Real Madrid target Carlo Ancelotti has asked to leave his role as Paris St-Germain coach but has been told by the club's president "it is not possible".

The Spanish giants had an approach for the Italian rejected last week.

"I've asked to leave and I am waiting for their answer," said Ancelotti, 53.

But PSG's Qatari president Nasser al-Khelaifi said: "He asked to depart for Real Madrid. It is not possible because he has a contract for one year more, so that is our decision."

Speaking to the Qatari-owned television channel Beinsport, he added: "It is his problem; it is not our problem. We have offered him another year more on his contract as well as the one he has.

"When you have a contract, everyone is normally obliged to honour that."

Jose Mourinho is still the Real Madrid manager but has been linked with a return to Chelsea this summer.

Ancelotti added: "There are possibilities. Real Madrid is one. But I have a contract here. We are going to wait for a response from the club, who are going to take a few days to decide."

PSG sporting director Leonardo earlier told French newspaper L'Equipe: "Carlo asked to leave for Real Madrid but we want him to stay. No decision has been made.

"Our priority is still that he stays. We have never contacted other coaches."

Asked about Ancelotti after being named the best player of the Ligue 1 season, PSG striker Zlatan Ibrahimovic said: "I don't want him to leave."

Ancelotti has guided PSG, owned by Qatar Sports Investments, to the French title this season - their first championship since 1994.

The Italian, who took charge in Paris in December 2011, chose not to answer questions about his future when asked on Friday in the build-up to his side's 3-1 victory against Brest.

Ancelotti has won league titles with PSG, AC Milan and Chelsea, also lifting the Champions League with Milan in 2003 and 2007.