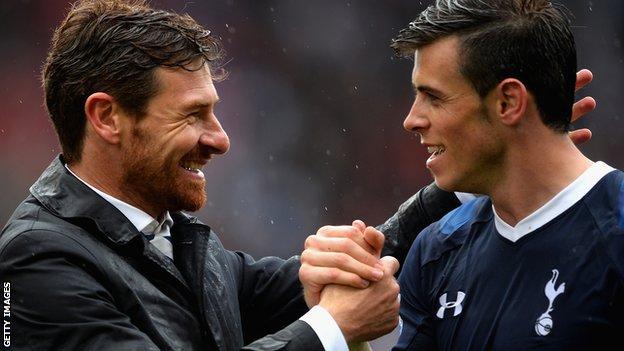 Tottenham boss Andre Villas-Boas says it is vital the club keep Gareth Bale if they are to improve next season.

Spurs missed out on a Champions League place on the final day of the season as they were pipped to a top-four qualifying spot by Arsenal.

The failure could raise doubts over 23-year-old Bale's future at the club.

But Villas-Boas said: "If we want to make it better next season we have to hold on to our best assets and this is what I have been told from the top."

Bale, who has been touted as a potential summer target for Real Madrid and other Champions League clubs, scored to give Spurs on the last day but gave them fourth spot.

Villas-Boas insists his side will recover from the disappointment of missing out on the Champions League and make an even more powerful challenge next season.

"We felt we did enough to deserve fourth spot," he said. "We are disappointed but we knew these could be the circumstances.

"It was a very good season. We pushed all the way for fourth and third spot and I think we can make it better next season."

Tottenham's haul of 72 points was their highest in the Premier League and Villas-Boas is already looking to strengthen his squad.

"Arsenal did their job at Newcastle but I think this season is a good reference for us in the future," said the Portuguese.

Tottenham's final points tally of 72 has eclipsed their previous best Premier League haul of 70, set in 2009-10. They finished fourth and qualified for the Champions League that season.

"To achieve 72 points and not make it shows that to compete at this level we will probably have to make more than that as other clubs have great, great squads.

"We will have to do it the Tottenham way. We have to scout properly and make good grabs in the transfer market this summer."

Villas-Boas was disappointed at referee Andre Marriner's decision to book Bale for diving in the area when he appeared to have been bundled to the ground by the Black Cats' Sebastian Larsson. It was the Welshman's fifth caution of the season for this offence.

The incident occurred in the first half with the games goalless at both Spurs and Newcastle - and Villas-Boas maintained it could have changed the emphasis of the decisive final day.

He said: "It happened in the first half and ... it would have been felt at Newcastle and could have changed the running of this game too.

"It is an extremely disappointing decision because Andre was involved with us at the beginning of the season and we spoke precisely about Gareth's incidents."