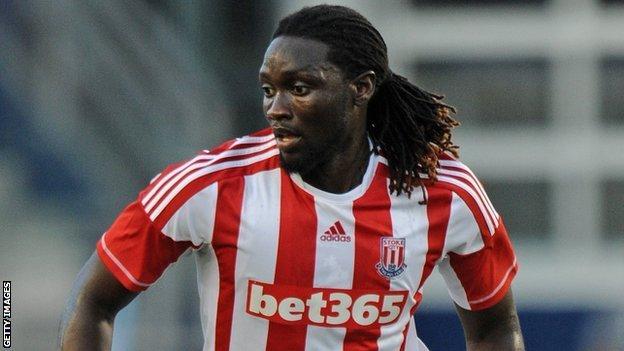 Stoke City are to investigate after a pig's head was reported to have been left in the locker of striker Kenwyne Jones at the club's training ground.

Jones was said to have been furious at the incident, which comes just two days before the club's final Premier League match of the season at Southampton.

"A full internal investigation will be carried out," said a club statement.

"Those responsible for any unacceptable behaviour will be dealt with by the club's disciplinary procedures."

Potters midfielder Brek Shea had earlier tweeted a picture of himself with the pig's head and the words "locker room banter gone wild".

Speaking to BBC Radio 5 live, Stoke manager Tony Pulis said he would be looking into the incident before Sunday's season closer at St Mary's.

"We have a smashing dressing room, and there are four or five lads who are always up to something," he said. "There is always banter going on.

"I honestly don't know what's gone on this morning, I've missed all of what's happened. I try to stay away from the home dressing room as much as I possibly can. I let the lads get on with it.

"We will look at it tomorrow, I will have a chat with the lads and find out exactly what has happened. From that point onwards we'll let everybody know exactly what the situation was."

"Big men acting like kids. A pig's head is not a prank, it's just disgusting. I don't get how was that supposed to be funny. Really?"

She later tweeted: "Everyone is entitled to their own opinions. Mine is I don't agree wrapping a pig's head in his clothes."

Earlier this week, retiring Stoke striker Michael Owen had his car covered in eggs and flour by team-mates, with 28-year-old Jones tweeting a picture with the explanation that it was a "leaving present" for the former England star.