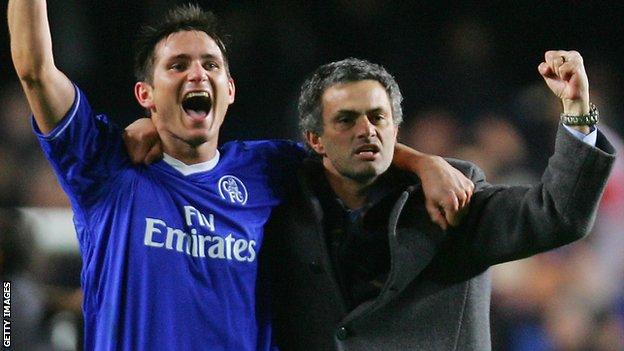 Jose Mourinho has been confirmed as Chelsea's manager, returning for a second stint in charge at the club.

The Portuguese won two consecutive Premier League titles during his first spell, which ended in September 2007.

Mourinho told Chelsea TV: "I promise exactly the same things I promised in 2004, with this difference to help - which is I'm one of you."

He added: "In football, in my career I've had two great passions, Inter and Chelsea, and Chelsea is more than important for me.

"He is undoubtedly a very good man manager, he gets people to play for him.

"He is such good value. The media love him, even if they have had fallings out.

"He understands how to talk to the fans, make the players motivated and play the media. He is a mover and a shaker, and the Premier League is better for having him back."

"It was very, very hard to play against Chelsea and I did it only twice, which was not so bad."

Mourinho, who will be officially presented in a press conference at Stamford Bridge next Monday, 10 June, brings three coaching staff with him in Rui Faria, Silvino Louro and Jose Morais.

Chief executive Ron Gourlay said of Mourinho: "He was and remains a hugely popular figure at the club and everyone here looks forward to working with him again."

Mourinho first arrived at Stamford Bridge in the summer of 2004, weeks after guiding Porto to the Champions League trophy.

He won the FA Cup and two League Cups as well as two Premier League titles but could not win the Champions League with the Blues.

His relationship with owner Roman Abramovich grew increasingly troubled and he quit despite having three years left on his contract.

Gourlay added: "I am delighted to welcome Jose back to Chelsea. His continued success, drive and ambition made him the outstanding candidate.

"It is our aim to keep the club moving forward to achieve greater success in the future and Jose is our number one choice as we believe he is the right manager to do just that."

He won his second Champions League trophy with Inter Milan in 2010, but left to join Real Madrid later that summer - replacing Manuel Pellegrini, who is favourite to take over at Manchester City.

He finished second in La Liga in his first season - four points behind Barcelona - but won the title a year later, amassing 100 points in the process.

However, this season Mourinho has cast a sulky figure, rowing with established players such as Iker Casillas, Sergio Ramos and Pepe, while seeing Barca romp to the title.

"I know in England I am loved," in April. "I know I am loved by some clubs, especially one."

Lampard told BBC Sport: "He's a great manager, I've said it a million times to the point of boring people, but I'm very fortunate to have worked under him before.

"He's taken that (a winning mentality) everywhere he's gone with him. He creates a spirit in his squads that you can see from the outside is very, very strong. He's a top-class manager, we all know that."

Mourinho replaces Benitez, to take over from Roberto Di Matteo in November and left to join Napoli after securing third place in the Premier League and winning the Europa League.