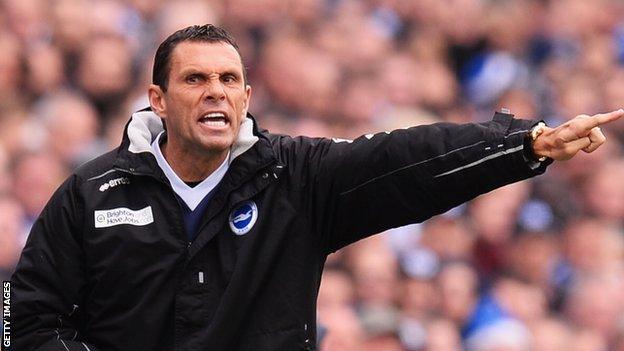 Brighton and Hove Albion have suspended manager Gus Poyet and told him to stay away from the club pending an inquiry.

The inquiry will investigate whether Poyet breached his contract with comments in the wake of this week's play-off defeat by Crystal Palace.

Poyet, 45, told BBC Sussex on Monday: "I will analyse where we can go and myself as well."

He added: "I have got to think about myself as well sometimes.

"Every summer you sit down and analyse where you can go, where you can get or not and depending on that you have got a project or a way of getting better."

The Uruguayan has been manager of Brighton since 2009 and won promotion from League One in 2011.

The former Chelsea midfielder guided them to a fourth-place finish in this season's Championship, but the Seagulls failed to reach the play-off final, losing 2-0 on aggregate to Crystal Palace in the semi-finals.

"I've not been in this situation but I don't like it," Poyet said on Monday. "It's changed my view completely about everything I was prepared for, so we'll see now.

"I have always said that all the time we keep improving I am going to be at this football club and the day we hit the roof, I'm not.

"Is there something more? Right now I don't know, so I need to make sure I know there is, because if not I am not going to stay forever."

Poyet is under contract until 2016 but he has made no secret of his ambition to manage in the Premier League in the past, although he rejected the opportunity to take charge of Reading in March.