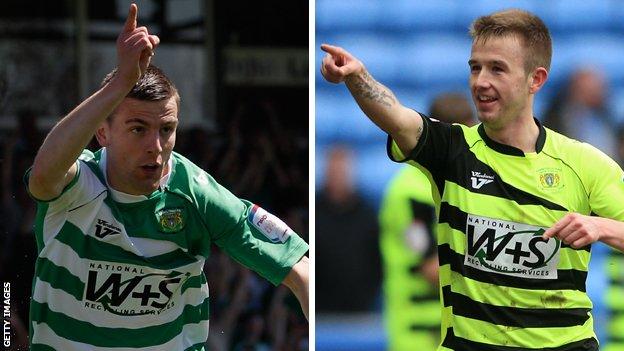 Footballers dream of being compared to the greats: Pele, Maradona, Messi.

Unfortunately for Yeovil Town duo Paddy Madden and Kevin Dawson, their team-mates have likened them to precocious Irish pop twins from a reality TV show.

"They always call us Jedward," complained 22-year-old midfielder Dawson to BBC West Sport. "Actually, they call us every name under the sun because we're never apart."

"The lads are a bit jealous," added best friend Madden, 23. "They just want to spend time with us but it's very hard to separate me and Kev."

Like those pesky X-Factor brothers, the inseparable duo have seen their fortunes rise in tandem.

John and Edward Grimes are Dublin-born twins who found fame on reality TV programme The X-Factor.

They finished sixth in the competition and have since competed in the Eurovision Song Contest and released three albums - all of which reached number one in the Irish charts.

And, in their first season at Yeovil, they are set to don matching green-and-white hoops and step out together on the Wembley turf in the League One play-off final against Brentford.

"To come to a club six months ago and play a part in them possibly getting promoted is amazing," said Madden.

"It's something I will never forget. We're 90 minutes away from that feeling and it's a feeling we all want."

The pair both played a major part in helping Yeovil reach the final.

Madden's 22 goals over the season rocketed the Glovers into play-off contention and earned him the golden boot, while Dawson's goal in the League One play-off semi-final against Sheffield United helped set up Sunday's meeting with the Bees.

And yet their arrivals at Huish Park went unheralded at the time.

Having grown up together in Coolock, Dublin, they both played in the League of Ireland Premier Division - Madden for Bohemians and Dawson for Shelbourne.

Madden was the first of the pair to make a move to England, signing for Carlisle in January 2011, but he failed to set League One alight first time round.

"I picked injuries up at bad times," he recalled. "I missed the first four months of my first season and then the following pre-season I got injured again. It's really hard to get into the team then.

"Strikers are different to other types of players. If you're not playing or scoring then it's a confidence knock."

In stark contrast to his form this year, Madden could only manage eight starts, 28 substitute appearances and two goals for the Cumbrians.

But Yeovil boss Gary Johnson saw a spark in the forward, comparing his energy and pace to that of late Glovers hero Adam Stansfield.

Johnson brought the Dubliner in on loan and he proved an instant success, scoring twice on his debut against Colchester, and netted five more times before his loan expired.

The Glovers boss had made up his mind on the striker early on and secured him on a permanent deal before the goals rushed in - and it turned out to be a remarkable piece of business.

Keen to keep within Yeovil's stringent budget, Johnson paid what he described as a "bargain" amount to Carlisle - believed to be in the region of £15,000-£20,000.

And it turned into a two-for-one deal after Madden approached Johnson about Dawson's availability.

"A lad back home was throwing my name around a bit but because I'm best mates with Paddy he said he would have a word with the gaffer," said Dawson.

"He went to see him on a Sunday and I was over here on the Monday."

Dawson's only Football League experience had come from watching his brother, Stephen, playing for Barnsley, Bury and Leyton Orient.

But Yeovil took another gamble on Madden's mate and after an initial trial he was signed until the end of the season.

Only five months and 23 games later, the midfielder found himself on the scoresheet in what was the biggest match of his career.

It was amazing to see him score. To think four or five months ago he was playing with Shelbourne.

"It happened really quickly," Dawson recalls of his goal against the Blades. "Me and Ed [Upson] made some eye contact and I knew where he was going to put it. Thankfully I ended up getting on the end of it and I kept my head to put it away nice and calm.

"It's the best feeling I've ever had in my life. It was a sense of relief when the final whistle went and the fans came on the pitch. It was a great feeling."

"It was amazing to see him score," added Madden, with obvious pride. "To think four or five months ago he was playing with Shelbourne. If you ask him whether he would be expecting to score in the play-offs, I don't think he would have.

"I was buzzing for him. He's been tremendous since he got here and he'll get his rewards if he continues."

An initial reward for the pair is the chance to lift Yeovil up to the Championship for the first time in their history.

It will be Dawson's first time at Wembley and he is suitably wide-eyed at the prospect. "I'm so excited. I just can't wait to get up there to see what it's all about," he said.

Madden has been once before, when Carlisle beat Brentford in the 2011 Johnstone's Paint Trophy final.

His excitement matches that of his flatmate, but he has something else weighing on his mind: he has not scored in six games.

"It's a strange feeling. Six games is a long time for me. I should probably only be going three at the most," he said with mild concern, before adding with a grin: "I guess they're all building up for the final."

Look out, Brentford. Jedward are coming for you.