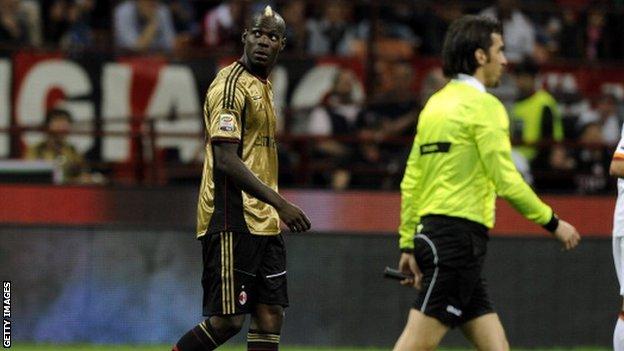 Mario Balotelli has threatened to walk off the pitch if he is ever again subjected to racist abuse from fans.

The 22-year-old striker was one of three AC Milan players targeted during their match against Roma on Sunday, which was halted for two minutes.

"If it happens one more time, I'm going to leave the pitch, because it's so stupid," the Italy international said.

"I was about to leave, but they will think I wanted to leave because we had difficulty with the game."

AC Milan were down to 10 men at the time when the Serie A fixture at their San Siro stadium was temporarily stopped. The game only restarted after the visiting Roma supporters were ordered to cease their behaviour.

Roma, who were fined 50,000 euros (£42,400) by the Italian Football League for the incident, released a statement on Monday condemning the actions of their supporters and promised to "face this issue head-on".

The punishment was criticised by Fifa president Sepp Blatter, who told the world governing body's website: "They have not made any investigation of what happened. Just to give a pecuniary sanction is not valid, not acceptable."

Balotelli, who has scored 11 goals in 12 games since his January switch from Manchester City, said the incident had altered his thinking about the best way to tackle the problem.

He told CNN: "I always said if it happens in the stadium, I would just behave as if nobody had done anything and that I don't care, but now I think I've changed my mind a bit."

There have been a number of incidents this season involving racial abuse of AC Milan's players.

A January friendly between Milan and Pro Patria was suspended because of racist chants aimed at Kevin-Prince Boateng.

The following month, Inter Milan were fined 50,000 euros after their fans were found to have abused their former player Balotelli in the Milan derby.

And in April, champions Juventus were fined 30,000 euros (£25,000) after their supporters racially abused the AC Milan players.