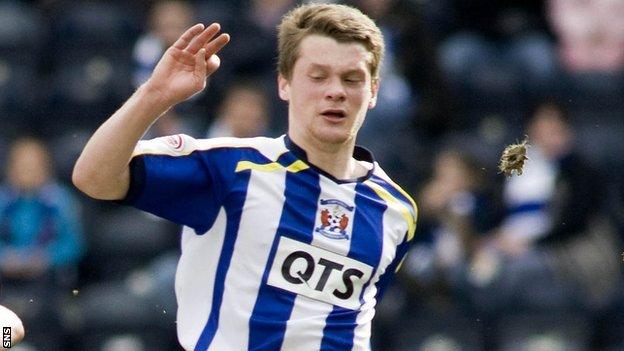 Kilmarnock fear young defender Ross Barbour could have picked up a serious injury in their 3-1 defeat by Hibernian.

The 20-year-old full-back was carried off after 34 minutes at Rugby Park with an ankle injury.

Manager Kenny Shiels told BBC Scotland: "He's gone for an x-ray. We're not sure yet. The swelling was quite quick, which is a bad sign."

Barbour has made 17 appearances for the Ayrshire side this season.

Alex Harris is a great little player, a fantastic player. The future's bright for that boy

Shiels showered praise on 18-year-old Hibs midfielder Alex Harris for making an impact as a substitute by setting up Eion Doyle for the first of the striker's two late goals.

"Harris is a great little player, a fantastic player," said Shiels. "The future's bright for that boy.

"And he's come on and Tesselaar knows that you show him on to his weak side and he's let him go on his strong side and he's drilled it across goal and Hibs were the first to react."

"Pat was clever," suggested Shiels. "He played players who are fighting to get a shirt in the final."

However, the Kilmarnock manager thought that his side did not deserve to lose, especially after losing the goals in a second-half in which he thought they dominated.

"In the first half, Hibernian had most of the play," added Shiels. "We talked about a few things at half time and corrected things.

"We were well on top, I think everyone can see that, but we've had no breaks against Hibs this season.

"It's just disappointing that we lose because we were in a winning position."