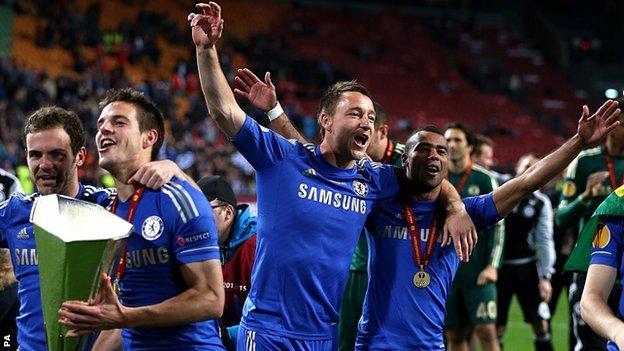 With a Europa League trophy and a Champions League place assured for next season, the reign of Rafael Benitez as interim Chelsea manager has almost come to an end.

Reports link former Blues boss Jose Mourinho with a return to Stamford Bridge, while it looks increasingly likely that veteran midfielder Frank Lampard will extend his stay in west London by at least one more season.

After a difficult campaign involving an early Champions League exit,a managerial departure and hostility from fans to the new arrival, two former Chelsea stars assess the current state of the club, the legacy of the Benitez era, and what 2013-14 could hold.

"Benitez has done a wonderful job and is leaving a mini-legacy from his time in charge, and people should be grateful for what he has done.

"There is a will about the team - you saw it in the Champions League final last year and it happened again at half-time tonight when the players themselves decided to go and win that trophy.

"The squad is in transition invariably. With John Terry and Frank Lampard, even if they do stay, it will still be relatively short-term.

"The team will continue to evolve and, having secured Champions League football, they can go out in the summer and attract players who would otherwise be looking elsewhere.

"There is a good strong nucleus of players there who are all pulling in the same direction and that is absolutely vital at the highest level if you are to overcome difficult periods in games.

"The club is in fantastic shape and it's just a shame, because of the way the club has operated, that people still talk about the other issues.

"Volatility is the norm and most people would ask how it can be success when it's unstable, but Chelsea is the anomaly.

"Rafael Benitez managed the squad and the players look like they're together. That stems from the manager and he's galvanised that squad.

"He deserves credit and it's a shame that some people want to tear that page out of the history books because of something he said a long time ago."

"The speculation I am hearing from behind the scenes is that John Terry will not be at Chelsea next year.

Chelsea's triumph means Rafael Benitez becomes only the fourth manager to win the Uefa Cup/Europa League more than once. Others to have achieved that feat are:

"Chelsea are formidable despite chopping and changing their manager all the time, but I do feel that if they had kept their managers for a little longer they might have won even more trophies.

"We wait and see who might come in here, but the academy is doing very well - they just lost to Norwich in the Youth Cup final on Monday night, and they have got talent coming through. But with a big club like Chelsea you want the finished article.

"Rafael Benitez's CV looks fantastic with another European trophy. I know the management have been very happy with him and they didn't realise the venom he would come across, but in different circumstances he would be the Chelsea manager next year.

"I have friends who support Chelsea. They're businessmen, sensible people, and they just have a blank when it comes to Rafa Benitez. I wish they'd change their minds but they won't. I wish the fans would show him some respect.

"It's the comment about the plastic flags that sticks with them. He's said he doesn't have anything to apologise for and he was defending his team. There are so many sub-plots, but he needs the respect he deserves because he's won a European trophy."