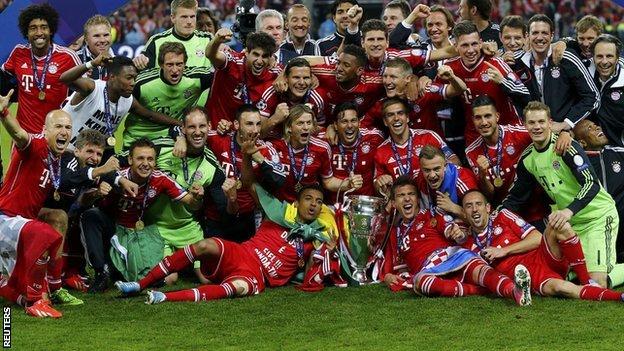 Arjen Robben's late winner exorcised the demons that have haunted him and Bayern Munich in the Champions League as they won a pulsating all-Bundesliga encounter against Borussia Dortmund.

The tournament's recent history has offered little other than unrelenting misery for Robben and Bayern - but the agony is over after a colourful, enthralling final that confirmed Germany as the new power base of European domestic football.

Bayern had lost two finals in three years, including defeat on penalties to Chelsea in their own Allianz Arena 12 months ago, but on this occasion they cast off the tag of losers to claim the crown for the fifth time.

Only Real Madrid (nine) and AC Milan (seven) have won this tournament more times and the taste of victory was even sweeter for 29-year-old Robben and veteran Bayern coach Jupp Heynckes, who steps aside to hand over to Pep Guardiola at the end of this season.

"Bayern Munich were magnificent but the man who should take all the plaudits is manager Jupp Heynckes. He has changed this team completely, he has got them fitter than Dortmund. He has got wingers Franck Ribery and Arjen Robben so fit. He has changed their mentality and he deserves this win."

Heynckes will have the chance to bow out with a Treble; Bayern have already won their league and face VfB Stuttgart in the German Cup final next Saturday.

Robben was reduced to tears at the final whistle after playing in Bayern's losing finals against Inter Milan and Chelsea, when he missed an extra-time penalty, and also losing semi-finals to Liverpool in 2005 and 2007 during his Stamford Bridge career.

And for 68-year-old elder statesman Heynckes, this was the perfect parting gift and proof of his enduring powers. He has provided a hard act for Guardiola to follow, even with his outstanding track record of success at Barcelona, which included two Champions League triumphs.

Robben, however, was the central figure as he set up Mario Mandzukic's first for Bayern on the hour but Dortmund, under the guidance of charismatic coach Jurgen Klopp, quickly equalised through Ilkay Gundogan's penalty after Dante fouled Marco Reus.

And Robben finally had his revenge on a competition that has been so cruel to him in the past, showing great composure to taken Frank Ribery's flick in his stride in the 89th minute and beat Dortmund's outstanding keeper Roman Weidenfeller.

Robben's goal was the decisive moment of a Champions League final that saw the Bundesliga come to London and deliver a powerful statement of intent about its current status.

As well as the quality of the football, which was truly exceptional, the supporters of Dortmund and Bayern splashed their yellow and red colours spectacularly across Wembley's canvas and the dignity and grace in defeat and victory of Klopp and Heynckes only confirmed this was an occasion that did great credit to these two German heavyweights.

Heynckes cut a mellow figure beside the animated Klopp in Wembley's technical area but Dortmund's coach, with his flamboyant gestures and trademark grin, has established a reputation as one of football's most significant figures.

And he will know, just as much as his players, that this was an opportunity missed by Dortmund. They paid a heavy price for failing to capitalise on a first half hour in which they dominated Bayern and were only kept at bay by the brilliance of Germany keeper Manuel Neuer.

The intense pressing style that is the trademark of Klopp's team pushed Bayern on to the back foot in the opening phases and left Dortmund regretting they did not take at least one of a succession of opportunities.

Neuer made five important saves in the first 35 minutes as Dortmund tested Bayern in a manner that proved way beyond Barcelona when they were humiliated 7-0 over two legs in the semi-final.

He thwarted Robert Lewandowski twice and saved superbly at his near post from Reus, who saw another shot blocked. Neuer was also tested by Sven Bender.

Reus then tested Neuer once more as Dortmund poured forward, urged on from the technical area by the animated Klopp as he delivered a constant stream of encouragement and applause in the direction of his players.

Bayern - finally emerging as an attacking force - may have had the feeling it was going to be another night of Champions League final misery when Weidenfeller touched Mandzukic's header on to the bar and denied Robben one-on-one before unwittingly blocking another effort from the eventual match-winner with his face.

The Bundesliga champions had been a growing threat after a poor start and the breakthrough finally came on the hour when Ribery played in Robben and his cross gave Mandzukic the simplest of tasks to finish from six yards.

Dortmund required a swift response and it came inside seven minutes - thanks to a piece of recklessness from Dante.

The Bayern defender, who had already been booked, needlessly raised his foot and caught Reus in the stomach. Gundogan stepped forward to score coolly from the penalty spot.

It took a magnificent piece of last-ditch defending from Neven Subotic to keep Dortmund on terms. Thomas Mueller rounded Weidenfeller and his shot looked destined for the net until the lunging Subotic somehow recovered to clear, prompting a fierce fist-pumping response from Klopp.

Both goalkeepers had been outstanding throughout and it was Weidenfeller's turn to demonstrate his ability once more with fine stops from David Alaba and Bastian Schweinsteiger as this enthralling final drew towards a climax.

It was Robben who made the decisive contribution and when Italian referee Nicola Rizzoli sounded the final whistle to start wild Bayern celebrations, he was reduced to tears as he finally realised his dream.