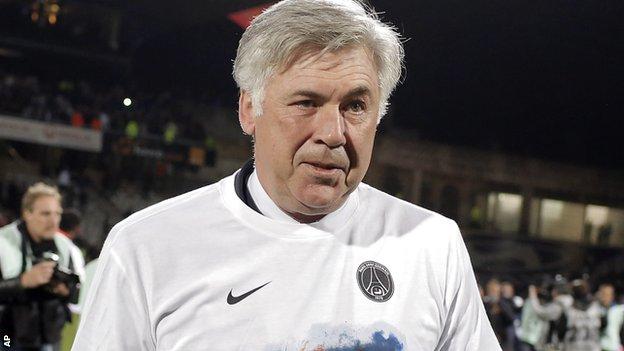 Paris St-Germain have rejected an approach from Real Madrid for the French club's coach, Carlo Ancelotti.

"Real came and I discussed it with them," said PSG president Nasser al Khelaifi. "He's got a contract for one more year. For me he's here next year."

Current Real boss Jose Mourinho has been strongly linked with a return to former club Chelsea this summer.

I can't say if I will leave or stay. I haven't talked to the president yet

Ancelotti, who was sacked by Chelsea in May 2009 after a trophy-less season, led PSG to their first national title since 1994 at the weekend.

They clinched the Ligue 1 title with a 1-0 away win at Lyon on Sunday and afterwards Ancelotti stressed he had not made a decision about his future.

"We are going to talk with the club," said the Italian. "I can't say if I will leave or stay. I haven't talked to the president yet."

Ibrahimovic does look set to stay with PSG after claiming a league title with his sixth different club.

The 31-year-old forward has won eight titles in total, at Ajax, Inter Milan, Barcelona, AC Milan and now the French side.

Two further triumphs with Juventus in 2005 and 2006 were later stripped as punishment for a match-fixing scandal involving the club.

Speaking on Sunday, Ibrahimovic vowed to add to that number with PSG next year.

"I am very pleased," he told French publication L'Equipe. "I have had a perfect start here in Paris.

"I could not have dreamed of anything better. I am now going to do my best to defend the title.

"I am under contract for another two years. I am a professional and I respect contracts."

Ibrahimovic has scored 27 goals in 32 Ligue 1 games in a productive debut campaign.

"When it is the first time, it is always fantastic," he added. "If PSG had won last year, it would be different.

"As it is, the club has been waiting for this for 19 years. I am here at the start of this wonderful story. It could not be better."