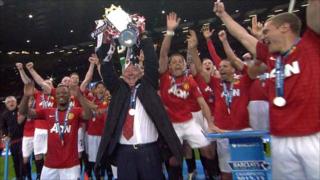 The sterling silver trophy was carried out by Steve Bruce and Bryan Robson who lifted it on the first occasion Ferguson led the club to the title.

His current players then handed the United manager the honour of lifting the trophy himself.

This year's success was the Red Devils' 13th under Ferguson, and the team will set a Premier League record of 29 wins in a single season if they win at West Brom next Sunday in his last game in charge.

Schumacher to join Haas for 2021