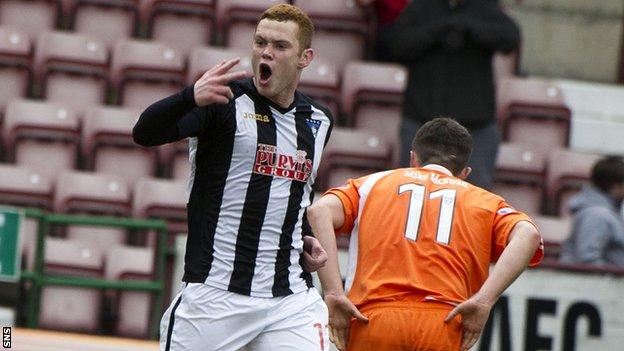 Allan Smith finally put the Pars ahead on aggregate 12 minutes into extra time, before a Stephen Husband double.

Dunfermline, who are in administration, will now meet Alloa in the First Division play-off final.

The winners will play in Division One next season.

Dunfermline, who finished second bottom of the First Division following a 15-point deduction, and the second, third and fourth teams in the Second Division are playing off for the Pars' spot in the second tier

Iain Campbell put Forfar ahead direct from a corner, before Mark McCulloch was sent off for bringing down Smith inside the penalty area.

Mick Dunlop inadvertently sent a Smith cross past his own goalkeeper to equalise on the day - and he was then dismissed for a cynical challenge on Alex Whittle.

Angry Forfar boss Dick Campbell then clashed with Dunfermline coach Neil McCann and both were sent to the stands.

The Pars went on to add a second through Ryan Thomson's 20-yard strike and made it 3-1 when Ross Millen converted a penalty after Omar Kader was penalised for handball.

Campbell's dismissal for his protests left his team with eight men heading into extra-time. And Forfar crumbled as Smith slotted in a fourth from just inside the area, before Husband added a brace.

His first was a superb 25-yard drive and the second a low drive from 12 yards to secure a 6-1 win on the day at East End Park and 7-4 aggregate success.