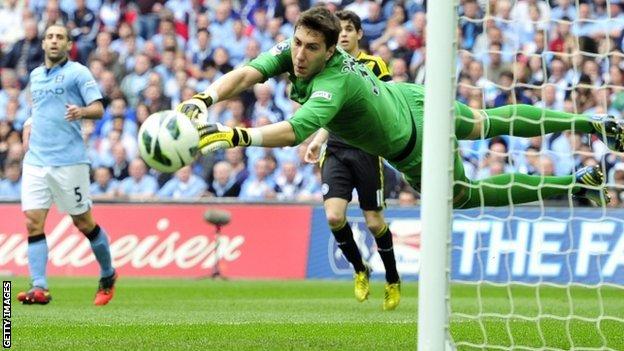 The places where the FA Cup final is still sacrosanct are dwindling but Romania remains one of them. On Saturday, the nation will tune in again hoping they see one of their own get his hands on the famous old trophy.

They are big hands too. At 6ft 8in, Manchester City's Bacau-born back-up goalkeeper Costel Pantilimon has the build of a basketball player and is the tallest man in the Premier League - at least he would be if he had played even a single game in the competition.

Instead, the 26-year-old has had to settle for being his side's cup keeper in the two seasons he has been Joe Hart's deputy at the Etihad Stadium, and this year has helped City make up for their disappointing defence of their league title by reaching Wembley.

Whatever happens this weekend, Pantilimon appears likely to leave England in the summer in search of first-team football, but his largely frustrating time on these shores will end in glory if, as expected, he is preferred to Hart and then helps City beat Wigan.

Dan Petrescu, with Chelsea in 1997, is the only other Romanian to win the FA Cup so how Pantilimon fares in north London matters back home in Eastern Europe, and not only because a good performance could win him back his place in the national team.

The FA Cup final has been special in that part of the Balkans since the reign of the communist dictator Nicolae Ceausescu, from 1965 to 1989, when it provided a window to the West.

Back then, the state television channel - the only channel in Romania - did not need a prime-time 17.15 BST kick-off to deem the final to be of sufficient sporting and cultural importance to make it the only game from outside the old Iron Curtain to be broadcast live.

It is still seen as significant now, long after the revolution which saw Ceausescu overthrown.

Romania legend Gheorghe Hagi, who played 125 times for his county and starred at three World Cup finals, told BBC Sport: "It is very popular and a very important game. All the Premier League matches are now shown over in Romania but the Cup final is an extra special one. I will be watching."

There is another reason other than tradition that Hagi will be looking out for Pantilimon's progress. He was one of the first to identify his ability when he signed him as 19-year-old for now-defunct side Poli Timisoara in 2006 and promoted him straight into the first team.

"Panti was very young at the time," Hagi recalled. "I knew him from the Romania Under-19 team and saw him as having a very good future. He is a big talent so I am so pleased he has done so well, playing for his country and moving to England.

"I wish him luck on Saturday but I am sure he will have a very good game. City can rely on him.

"Of course he is tall but there is more to him than that. He has great reflexes and even then he had very good technique. Then there is his character. He is a very serious and hard-working guy who is a great talker. He always loved to learn.

"He also has good movement and is good on the ball, as you have to be as a modern keeper."

Those ball skills were honed when Pantilimon was a boy. Like most of his generation he idolised Hagi and dreamed of scoring goals, not stopping them. Then he started to grow... and grow.

His father advised him to try out in goal. By the time he was a young teenager he was tall enough and good enough to play for Aerostar Bacau, a tiny team from the aircraft factory where Pantilimon Sr worked as a machinist.

Even then Costel was showing the traits of a top keeper - as his first coach, Valerian Voicu said "it was like his only chance in life was football, and he clung to it".

In his early days, Pantilimon dived around on concrete pitches and things were no easier away from football. Both his parents are profoundly deaf and he has never forgotten their encouragement for him to follow his dreams.

If successful on Saturday, he will share a bonus of £500,000 with his team-mates, a far cry from his first pay-packet of around £80, which he received when he was called up to a national training camp at the age of 14. He bought himself some new shoes, then gave the rest to his dad.

Nicknames: The Maradona of the Carpathians, The King

Pantilimon will deserve his bumper pay day too. He is one of only four City players to have featured in every one of their five wins on the road to Wembley - the others are defender Pablo Zabaleta, midfielder James Milner and striker Carlos Tevez - and he is one of two, along with Zabaleta, not to have missed a minute.

He has played more than 450 minutes in total, but the only goal he has conceded was a trademark hooked strike by Demba Ba in City's hard-fought semi-final 2-1 win over Chelsea.

Pantilimon made some vital stops in that game to ward off a determined fightback from the holders and his efforts have not gone unnoticed or unappreciated by his team-mates.

"If there is one player who deserves to win the FA Cup, it is Costel," Zabaleta told BBC Sport. "When he plays, he knows the whole team has belief in him.

"It is always difficult to come in and out of the team, especially for him when he is on the bench for every league game, but he has responded very well in the Cup and he has done a great job."

City captain and centre-back Vincent Kompany said: "Costel definitely deserves credit. The good thing for us is that we always feel safe, whoever we have behind us."

But could Pantilimon's 12th appearance in 21 months at City also be his last? He certainly suggested as much when asked about his future this week, explaining that he needs to fight for his international place.

"I am happy here, but it is normal that I want to play regularly," he told the Daily Mirror. "The technical staff know that after the season is finished, I want to leave."

Should he go? "I know he is settled at City and in Manchester, and he is at a big club. But he is not young now and he just does not play enough games," added Hagi.

"He has enough quality to be their first-choice keeper but Hart is also a very good keeper. It is Panti's decision - and it is a big one."