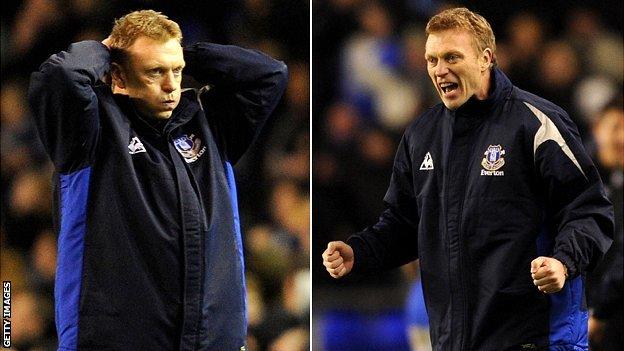 David Moyes hails from a different side of the River Clyde to Sir Alex Ferguson but they have both ended up at the final destination of Manchester United and Old Trafford.

The 50-year-old, confirmed as Ferguson's successor on Thursday, is from Partick while Ferguson is a famous son of Govan but the Glaswegian pair now stand on common ground.

As Ferguson prepares to take his leave after Moyes will move from Everton as the chosen one to pick up the mantle carried by his fellow Scot with unprecedented success.

Moyes' only silverware is the 2000 Division Two title with Preston and he has limited European experience - but in so many respects it is not a surprise that United regarded him as the heir to Ferguson. He ends 11 years of punching above his weight at Everton to join one of the game's superpowers.

When many cry out for good British managers to be given a chance at the top Premier League clubs, here we have one being handed the biggest of them all. All with Ferguson's blessing.

The 71-year-old Ferguson was first impressed by Moyes when he was leading Scottish FA coaching courses, brainstorming events also attended by the young Jose Mourinho.

Moyes recalled: "They were really vital. Those SFA courses, the staff coaches were Alex Ferguson, Walter Smith, Jim McLean, Craig Brown and Archie Knox. What players or coaches of the future would ever get a chance to work with people like that?

"These guys gave up two weeks of their summer to help develop people for the future. I was mad for it. I wanted to hear from them. Part of it was going to the pub in the evenings with them. I would do anything to get close to their company."

Moyes heard enough and Ferguson saw enough for a lasting good impression to be forged. The pair were almost together at United early in 1999 when Moyes, forging a reputation at Preston, was just beaten to the role of assistant manager at Old Trafford by Steve McClaren.

Even then Moyes was drawing comparisons with a young Ferguson, not simply because he was showing a natural flair for coaching and management but also with his firebrand nature.

In July 2001 it even led to what he described as a "regrettable" incident in a nightclub on a pre-season tour when an angry Moyes confronted North End midfield player Paul McKenna and goalkeeper Tepi Moilanen after two poor results against German Third Division side SV Wacker Berguhausen and Turkish First Division club Kocaelispor.

"It is interesting that Manchester United are going for another British manager because a lot of big clubs, such as Arsenal, Chelsea and Manchester City have hired foreign coaches with big names.

"United have had all their success with British managers so why go in the opposite direction? It makes sense to go down the same route."

It was all part of the education and he succeeded one of his coach mentors Walter Smith at Everton in March 2002, first moving the club away from relegation trouble before laying the building blocks that have brought a succession of top-10 finishes, European football and a place in the Champions League qualifying stage in 2005, when they lost to eventual semi-finalists Villarreal.

The long apprenticeship served by Moyes moved him to the top of Old Trafford's list of successors to Ferguson when he decided to step down. Some will regard following arguably the game's greatest manager as a poisoned chalice but the appointment has Ferguson's fingerprints on it - he will surely have assured those in control at Old Trafford that Moyes fits the bill.

Moyes was schooled in the same way as Ferguson, learning his football on Glasgow's streets before taking his thirst for knowledge into a playing career that started at Celtic and finished at Preston, where he figured alongside young loan signing David Beckham in 1995.

Moyes said: "You had to look after yourself in Glasgow. You had to be sharp with your tongue, or a good runner to get away from people, you had to handle yourself. In Glasgow you call it being gallus."

They are qualities Ferguson will have recognised and remembered as his thoughts turned to retirement and United's line of succession.

Married with two children, Moyes won instant favour when he walked into Everton and - much to the chagrin of Liverpool supporters - declared them "The People's Club." He will walk into "The World's Club" when he settles behind his new desk at Carrington.

United have appointed a coach as well as a manager. Moyes craves the training ground as much as the manager's office. He will delegate to trusted staff but still wants to put on sessions himself.

And, like Ferguson, he can be spotted watching football matches in the most unlikely places. It is an all-consuming passion that mirrors the man he succeeds. They even share a love of the horses.

It seemed Moyes' lack of European experience might count against him in United's considerations, but his willingness to give youth a chance and ability to work on a strict budget at Everton removed the doubts.

United will operate at the top end of the market but Moyes has been a shrewd judge elsewhere when signing players such as Tim Cahill for £2m from Millwall and Phil Jagielka from Sheffield United for £4m.

If there has been a criticism of Moyes during his Everton years it has been a suggestion that caution is his default option at the real pressure points.

Everton have often stumbled at their big moments under Moyes, notably in the FA Cup final against Chelsea in 2009, a desperate FA Cup semi-final loss to Liverpool at Wembley last season and this campaign's calamitous 3-0 FA Cup quarter-final defeat to Wigan Athletic at Goodison Park.

He will never have a better opportunity or bigger stage to put matters right.

Moyes has also faced questions about Everton's playing style - with an emphasis on work ethic and organisation often highlighted to damn him with faint praise - but he will respond by saying he was operating within his means. The Everton budget did not lend itself to the regular signing of match-winners.

It was no coincidence that when Moyes had his full squad available earlier this season, Everton's followers believed they were watching the most attractive attacking football they had seen since their 80s pomp. Manchester United were well beaten, despite a narrow 1-0 scoreline, on a thunderous night at Goodison Park in their first game this season.

Tactically, Moyes has long favoured the use of a lone striker with a midfield player dropped off behind, for many years Cahill and earlier in this campaign Marouane Fellaini, with a solid midfield base. This season full-backs Leighton Baines and Seamus Coleman have consistently provided attacking width to augment Steven Pienaar and Kevin Mirallas.

If one of Moyes' greatest strengths has been to cut his cloth accordingly, then it would be no surprise to see him utilise the full range of United's attacking talents - it would be foolish not to.

Moyes will now face new pressures but he has been a very popular figure with the Merseyside media he has worked alongside for his time at Everton. He has a reputation for honesty and straight dealing which will serve him well in the Old Trafford hothouse.

The Manchester United experience has broken men as well as made them, but after observing Moyes at close quarters for so long, Ferguson, who will now take his place in the boardroom, will be confident the right man has taken his place.