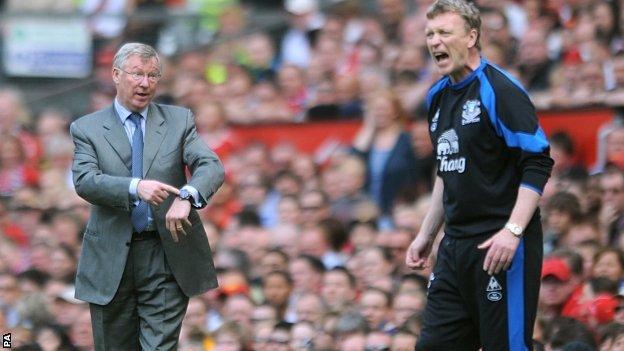 David Moyes will be able to draw on footballing and financial riches that were beyond Everton's reach as he prepares to succeed Sir Alex Ferguson at Manchester United - but this does not mean his "in tray" will be empty.

The 50-year-old's expected ascension to one of world's football's most prestigious and pressurised posts has been long in the making from his days as a managerial rookie at Preston North End, but managing United will put him in the spotlight as never before.

Ferguson once described United as "the bus that waits for no-one" - and time and tide will not delay for Moyes as he settles to his task in Carrington's opulent surroundings.

If the assignment of succeeding arguably the greatest manager in football's history is not daunting enough, he arrives at Old Trafford at a time of fierce challenge, despite a 20th title being secured in relative comfort this season.

As Ferguson himself stated just 48 hours before his shock retirement, there is much to be excited about in United's current squad but also much to be done to renew the champions in the face of searching examinations from their rivals.

Manchester City, wounded by losing their crown after only one season again, are expected to flex their financial muscles in a way they declined last summer while all signs point to Jose Mourinho returning to Chelsea to resume old hostilities with United in pursuit of the Premier League.

And as a keen student of the Bundesliga, Moyes will also be aware of the new superpowers of Bayern Munich and Borussia Dortmund as he tries to bring the Champions League back to Old Trafford.

Moyes will want to bring his own brush strokes to Old Trafford's canvas while retaining the best of what Ferguson firmly believes is a solid foundation for the future.

Will Moyes be tempted to glance back in the direction of Goodison Park for new recruits? United were linked with England left-back Leighton Baines under Ferguson while the midfield power of Marouane Fellaini may be seen by some as an asset to a United midfield that, while dominant domestically, lacks the old authority in Europe.

Michael Carrick had an outstanding season but the feeling remains United still need a world-class midfield operator if they are to bridge the gap between great success at home and falling short abroad.

Moyes will have a new arrival in Wilfried Zaha from Crystal Palace while his lower division network of scouts will have ensured he was well aware of the gifted Nick Powell before he moved from Crewe to United.

He will also be reunited with Wayne Rooney, his former teenage Everton tyro whose own future has been the subject of speculation.

The pair had differences when they parted in 2004 and four years later Moyes accepted substantial libel damages over claims made in Rooney's book about their relationship at Everton.

Since then, however, the pair have been reconciled and there is now warmth once more, with Rooney taking to Twitter in September with the words: "Everton are playing brilliantly. David Moyes has done some job over the last 10 years."

Rooney, by his own high standards, has been below his best this season so it will be intriguing to see how he may attempt to revive the player to whom he handed his first-team debut as a 16-year-old.

He will want to see signs that Chris Smalling and Phil Jones, along with Jonny Evans, can stay fit long enough to show they can be the long-term central defensive successors to Rio Ferdinand, who is 35 in November, and Nemanja Vidic, who turns 32 a month earlier.

Moyes must also decide whether attacker Nani, so frustrating under Ferguson, is worth the lucrative new contract he demands or whether Anderson is worth persistence. He will have funds available but they could both be used to raise further cash.

Paul Scholes is poised for his second retirement but Moyes will rely heavily on the know-how of Ryan Giggs on and off the pitch as someone locked in to the inner workings of Manchester United.

And what of Ferguson's continued presence in the boardroom? United fans with long memories will remember the botched succession to Sir Matt Busby in 1969 when Wilf McGuinness, only 31 at the time of his appointment, could not escape from the legendary manager's shadow and lasted only 18 months.

Ferguson's close personal relationship with Moyes, and as a constant champion of his work at Everton, means there is very little chance of friction between the boardroom and the manager's office.

And as someone well-versed in the ways of Old Trafford, Ferguson is sure to make any interventions cautiously, preferring to act as wise counsel to Moyes should he need advice.

The cynics may portray Ferguson as overlord or puppetmaster, but Moyes has never pandered to his fellow countryman despite holding him in the very highest regard.

Moyes faces the great challenge of succeeding Ferguson and there is plenty to keep him occupied as he tackles the giant beast that is Manchester United.