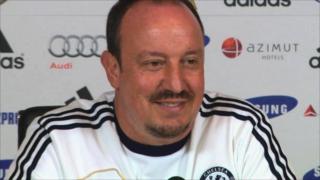 Chelsea interim manager Rafael Benitez says "everybody knows" who will be Blues boss next season, adding to the speculation about Jose Mourinho's possible return to Stamford Bridge in the summer.

Mourinho, 50, has been widely tipped to leave his current post at Real Madrid to return to the club where he was manager between 2004 and 2007.

Benitez also responds to criticism of the way David Luiz behaved when Manchester United defender Rafael was sent off during Chelsea's 1-0 victory at Old Trafford on Sunday.

Lampard 'not blown away' with derby win