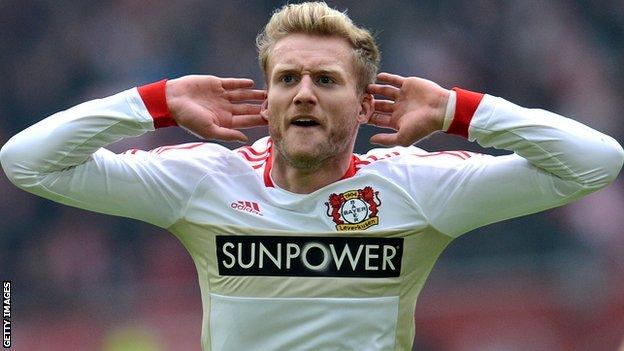 Chelsea have signed Germany international forward Andre Schurrle from Bundesliga side Bayer Leverkusen for a fee of £18m.

Schurrle, who becomes manager Jose Mourinho's first signing since returning to the club, has signed a five-year deal.

"It is an honour for me to play for this club, with this team and for these great fans," Schurrle said.

Those performances helped the club finish in the third and final automatic Champions League qualifying place in the Bundesliga.

Schurrle, who is comfortable playing on the wing or in a central striking role, has also impressed for Germany - scoring seven goals in 24 appearances - and was included in their Euro 2012 squad.

He joins up with compatriot Marko Marin, who moved to Stamford Bridge from Werder Bremen in July 2012 but made just 12 appearances in his debut season.

Leverkusen rejected a bid from Chelsea for Schurrle last summer, and the German club revealed renewed interest from the Blues before Mourinho's appointment on 3 June.