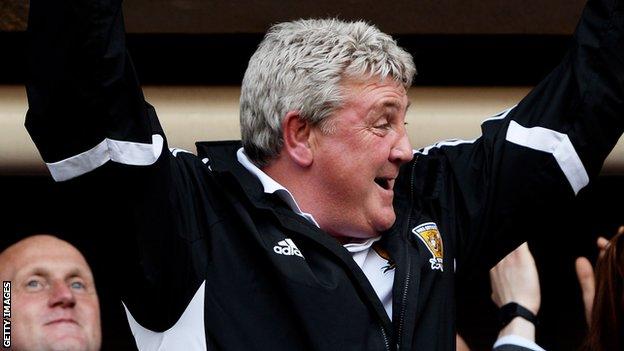 Manager Steve Bruce said Hull deserved their promotion to the Premier League after showing "guts" on a dramatic final day of the Championship season.

The Tigers, held to a 2-2 draw by champions Cardiff, finished two points ahead of third-placed Watford, who lost 2-1 at home to Leeds.

Leading 2-1, Hull missed a late penalty before Cardiff levelled from the spot.

"I've been in the game a long time and I have never experienced anything like the last 10 or 15 minutes," said Bruce.

Hull had started the day one point ahead of Watford in the table, but had failed to win their previous three games.

And the Tigers fans had to wait around after the final whistle before promotion was confirmed as there was a 16-minute delay in the Watford game following a serious injury to keeper Jonathan Bond.

Fraizer Campbell had put Cardiff ahead before Nick Proschwitz and Paul McShane looked to have won it for Hull.

In a exciting finale, Proschwitz missed a late spot-kick before Cardiff, by now down to 10 men after Andrew Taylor was sent off, won a stoppage-time penalty which Nicky Maynard converted.

"I don't think I've ever seen or witnessed anything quite like that," admitted Bruce, who had twice previously led Birmingham to promotion to the Premier League as manager.

"We had heard Watford were 2-0 up and they weren't - we could have put it to bed.

"How many chances have we had? We had a penalty and missed it. It was totally ridiculous.

"I have said for weeks there would be twists and turns.

"The referee gave them an unbelievable decision to give Cardiff a penalty but it's our day.

"I'm delighted for my former club. What a dramatic end to the season but you can't say Hull don't deserve it. The reaction of the fans tells you what it means to be back in the Premier League."

"It took guts for us, the players rolled their sleeves up and have put in a real shift.

"To win promotion without any strikers for three months is a remarkable testament to this squad.

"They might not be as naturally talented but they're a great bunch and they've got a huge desire which has took us where we wanted to be."

Some of Bruce's players retreated to the dressing room after the final whistle at the KC Stadium while the Watford game continued.

"I thought it was over and was thinking of the play-offs," admitted defender McShane.

"I couldn't have written this better. We made it hard but we saved the best until the last day."

Team-mate George Boyd was one of those who hid in the changing rooms.

"I couldn't watch it," the forward said.

"Leeds have done us a massive favour and well done to them for putting on a show. They could have easily thrown it in but they did us a favour."

Egyptian-born businessman Assem Allem, who took over the club in 2010, admitted that the final moments of the game were stressful but added that Saturday was one of the proudest days of his life.

But he refused to say how much money would need to be put into the club to make them competitive in the Premier League next season.

"It is very difficult to give an answer," he told BBC Radio 5 live's Sportsweek programme. "The manager and chief executive have been very busy concentrating on what we wanted to achieve so we didn't have the luxury of discussing next season.

"Next week we will all sit down and talk about it and look at what needs to be done."