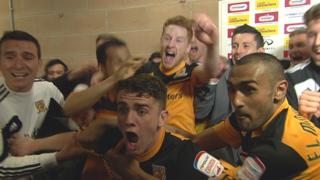 Hull City players celebrate promotion to the Premier League after a dramatic conclusion to the regular season in the Championship.

Hull began their match against champions Cardiff knowing they needed to match or better Watford's result against Leeds to guarantee automatic promotion.

Steve Bruce's side were held to a 2-2 draw and his players were then forced to watch the closing stages of Watford's match on television, with the game at Vicarage Road running 16 minutes behind schedule.

A 2-1 win for Leeds means Watford will go into the play-offs, while Hull return to the top flight after a three-year absence.

Europa League: Rangers 1-0 Benfica - can Gerrard's side earn another win?

F1 must do more on human rights - Hamilton

Arsenal into last 32 with win at Molde

Sloppy Celtic out of Europa League