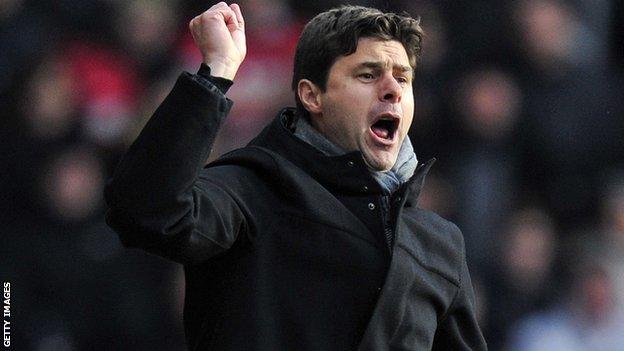 Southampton manager Mauricio Pochettino is the first to admit he has no life outside of football - but he would not have it any other way.

It's just gone seven o'clock on a glorious Thursday morning by the south coast and Pochettino is already hard at work.

Four months have passed since he walked into a storm of outrage and controversy by replacing Nigel Adkins, but at Southampton's training ground - tucked away down a quiet, residential lane - the 41-year-old Argentine is a picture of calm and tranquility.

"It feels like my home," he says as he prepares to face the Football Focus cameras.

When the day draws to a close, he drives back, eats and then goes to sleep. There is no time for distractions.

"I don't have a life outside football," he told me.

Football has meant everything to Pochettino for as long as he can remember. He grew up in the badlands of Argentina's Santa Fe province where his father was a farm labourer.

"I was very happy," he said, without hesitation, when asked about his childhood in Murphy, a settlement which grew up because an Irish family made land available to the locals, helping them to build railways and create a local government.

The family were not well off, and there was no room for luxuries. "It was a very small town and what I did every day was go to school and play football all day long with my friends. We didn't have a TV in the house," recalled Pochettino.

The 1978 World Cup was to prove a pivotal moment in his life. He and his friends would gather at the local football club to watch their heroes, Ossie Ardiles, Mario Kempes and Daniel Passarella.

"The first games I watched were in that World Cup, that was the first time I really watched football on TV," he recalled.

Before long the family bought a small black and white television that was only switched on during special occasions. Pochettino's father would take the battery from the farm's tractor and power up the set with it.

It is all a far cry from the world of modern football but the values of his upbringing have provided him with a management style that the players respect and respond to - discipline and hard work is mixed with warmth and openness.

Pochettino's playing career began with Newell Old Boys in Argentina, where he quickly established a reputation for being a pragmatic and powerful central defender.

A move to Europe followed - he played for Espanyol and Paris St-Germain - but it was for Argentina that he stood out, even though his most famous moment in the sky blue and white stripes came when Michael Owen tumbled over his leg to win a decisive penalty in the 2002 World Cup.

A smile spreads across his face when I asked him what he remembered of that day in Sapporo, Japan.

Stretching out his arms in front of him, Pochettino said: "Owen had the ball. I stuck out my foot and he dived. In that moment, Michael was more Argentinian than me. But I mean that as a compliment."

So how did the son of a farm labourer from Argentina end up as a manager on the south coast of England?

Simple. "Nicola (Cortese, the chairman) rang me, he offered me the job and I accepted," he said.

Less than two months earlier, Pochettino - who the previous summer had turned down offers from a number of European clubs, including Napoli - had been sacked by Espanyol after three years in charge.

He had planned a total break from football but when Cortese called, everything changed.

"I had made a decision not to coach for the rest of the season," explained Pochettino. "I wanted to spend some time getting my energy back, travelling, getting ideas, seeing things in a new light. But when Nicola called me I was excited about the project he was describing. I knew I had to take the job."

While Pochettino won the Saints fans over quickly, Cortese took the flak for hiring him. Some accused him of making the club a laughing stock by deciding to call time on Adkins so soon into their first season back in the Premier League.

When Cortese, acting on behalf of the late Markus Liebherr, bought Southampton in 2009, the club were 24th in the third tier of English football having been deducted 10 points for going into administration.

In the first season, the club survived. But in the second and third, they thrived, gaining successive promotions - it is a story that no one would have deemed plausible at the time.

So what is it like to work for and with Cortese? "He is a very pragmatic and direct person," Pochettino said.

"He is a person who doesn't beat around the bush. He tells you what he likes. And what he doesn't.

"He tells me things straight to my face and is tough when he has to be, because he is the figurehead, but he still uses common sense in many situations.

"He always makes his presence felt, especially in the tough moments. But he is committed to us. "

Cortese and Pochettino talk several times a day and share a single ambition for the growth and future success of Southampton. "He is very clear with his ambitions and he has a very clear vision of what football is," Pochettino added.

"And if we look back to the past few years he has done an amazing job. Perhaps the most popular person at the club should be him."

And yet the decision to sack Adkins, whatever the success since, still upset many. Was there any sense of guilt on Pochettino's part in taking the job in those circumstances?

"When you are called up and offered a job as a manager, you can either accept or not accept," said the Argentine.

"But there is no doubt, I made my decision for myself. Not thinking about anyone else."

I am living fully dedicated to this club. In football there is not really a timetable, we just work all day long. I don't consider this work, this club is a passion

When he arrived at Southampton, Pochettino was given the opportunity to add to the squad in the final weeks of the January transfer window. He declined. In his view the players he had were more than good enough to keep the club in the Premier League, but they needed to work harder within a more defined tactical blueprint.

The high pressing game with which he made his name in Spain was in evidence from his first match, a goalless draw at home against Everton. Now the players talk of needing three lungs to play for the manager, as well as an engine the size of his 4x4.

But anyone who watches training can see the squad are thriving on these new methods and developing in an atmosphere where attacking freedom and creativity is encouraged.

Home victories over Manchester City, Chelsea and Liverpool hinted at the potential. And yet, despite those wins and a recent run of six matches unbeaten, a 3-0 defeat by West Brom last weekend leaves the club still needing a point to be certain of Premier League survival.

A trip to White Hart Lane on Saturday comes next. "We are aware we still have work to do," he added. "We have three games left, we need to get the maximum amount of points from those games and we are working on that."

Behind the scenes the club is already working hard to plan for next season.

Two players are already close to agreeing transfers, and one or two more may follow.

The other aspect of the summer will be the need to ensure the pick of Southampton's best young talent, players such as Luke Shaw and Morgan Schneiderlin, stay put.

And there is a quiet confidence within the corridors of power at St Mary's that none of their most prized assets will leave this summer - whatever the offer.

Saturday, 4 May: Tottenham (a)

"I am really happy with how the club is doing, with my time here," Pochettino said. "We can always improve upon things and we are in that situation of always wanting to learn new things, with ambition and with a desire to keep on working, looking forward and learning new things."

Should the club survive, as many expect, next season will see sights raised to the top half of the table and beyond.

But Pochettino was reluctant to discuss any of that talk.

"I am only thinking about the next three games and nothing else," he says.

"We will have enough time to talk about next season's goals once we have achieved the goals we have set for ourselves this season."

The hard work has just begun. But Pochettino is more than ready.

Watch the full interview on Football Focus at 12:15 BST on Saturday on BBC1 and online.