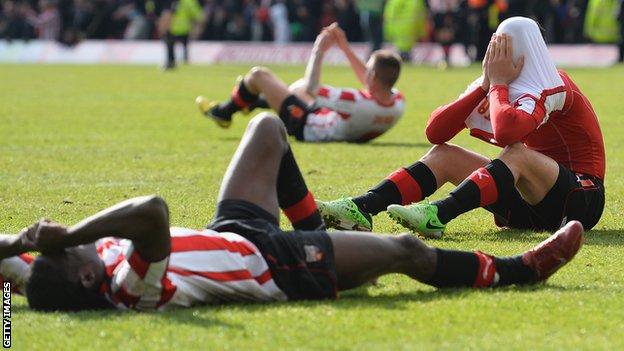 Had Marcello Trotta converted his second-half stoppage-time penalty kick against Doncaster Rovers last weekend, Brentford would have been promoted to the Championship.

The Italian missed and now the Bees have to progress through a play-off semi-final tie against Swindon to have another chance of securing a place in the second tier.

The players and their manager Uwe Rosler are adamant they have moved on from that late drama at Griffin Park.

We had one kick to clinch it, but it's about now showing character, picking ourselves up, moving on from it and going up via Wembley

"It was one of the worst experiences I've ever had," central defender Harlee Dean told BBC London 94.9.

"We all drew a line under it on Monday when we had a meeting. We all got what we wanted off our chests and everyone has moved on since.

"There is no need to dwell on the Doncaster game. It was an opportunity missed but we have got another chance, which not many people would have had.

"Nobody expected us to be where we are. We had one kick to clinch it, but it's about now showing character, picking ourselves up, moving on from it and going up via Wembley.

"It's about regrouping and being positive."

Rosler says the club's end-of-season dinner on Sunday night went some way to seeing the players and staff put Trotta's penalty miss behind them.

The 20-year-old, on loan from Fulham, had insisted on taking the decisive spot-kick, despite club captain Kevin O'Connor being the designated taker.

"I wasn't sure how the players or fans would react, but to get them in on Sunday at a well-organised event was the best thing which could happen," Rosler said,

"Everybody was relaxed and I had the chance to talk to Marcello, Kevin and a number of players.

"When we left everybody had it out of their systems and then we met on Monday. On Tuesday I could see no signs of depression or feeling sorry for ourselves.

"Now we go again but even harder."

With what is essentially a young squad, Rosler guided the west London club to third in League One in his second season in charge at Griffin Park.

The German is keen for his side to move on from heartbreak against Doncaster when they face Swindon Town over two legs on Saturday and Monday.

"It was hurtful but maybe we should reflect on the whole 10 months," Rosler said.

"We finished third and earned the first opportunity, which was unfortunately missed, and now we have another opportunity.

"It will be a tense game but probably not as tense as last Saturday as there are two legs. We need to have the same desire but also make sure we use our heads.

"It is important that our supporters understand there is no room for being fearful or negative.

"It is important we have the belief and faith in our players that we can achieve it. That will be crucial for us."

Dean says he is desperate to clinch promotion in order to repay Rosler for launching his career.

The 21-year-old centre-back was on loan at Griffin Park from Southampton last season, and has played 53 times in the current campaign after signing a two-year deal last summer.

"This is my first full season and I owe him everything," Dean said. "He is the one who gave me my chance in league football.

"He has taught me a lot of lessons, both football-wise and attitude-wise. He has helped me from being a young boy into being a man.

"This time last year I had come on loan, was out of contract at Southampton and was weighing up my options with certain other clubs.

"I wouldn't have signed here if I didn't believe in the gaffer and didn't feel he believed in me. I feel I have come a long way. I have been made captain a few times and am now vice-captain at only 21.

"I have grown up a lot and matured a lot, not only mentally but also in terms of my football. I want to repay him by getting promotion this season."