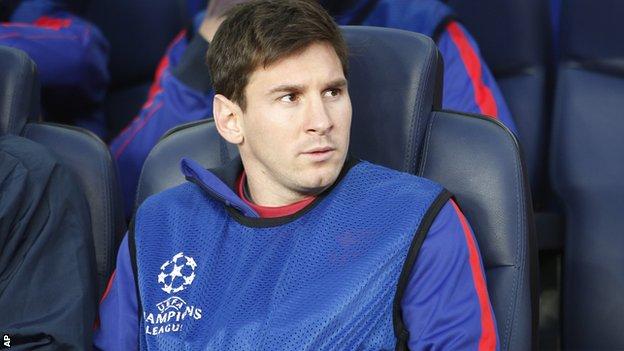 Lionel Messi would not have prevented Barcelona's 3-0 second-leg thrashing by Bayern Munich at the Nou Camp, admitted his team-mate Gerard Pique.

Arjen Robben and Thomas Mueller scored either side of Pique's own goal to complete Bayern's 7-0 aggregate victory in the Champions League semi-final.

Centre-half Pique said: "The fact Lionel Messi, the best player in the world, did not play was a factor.

"But I do not think [he] would have changed things all that much."

Argentine playmaker Messi, who has scored 54 goals in 45 appearances this season, had been expected to play after coming off the bench to score against Athletic Bilbao last weekend.

But Barcelona manager Tito Vilanova said the 25-year-old Ballon d'Or winner aggravated a hamstring injury in Saturday's match and would only have been risked late on if a comeback had been possible.

"He trained yesterday and today, but he didn't feel right," said Vilanova. "He is an explosive player and there was a risk he could tear (his hamstring), so he couldn't help the team in these conditions.

"When you have a player that is so good, it is normal that you notice it. If Bayern had been without (Franck) Ribery or (Arjen) Robben they would not be at this level."

Vilanova was also without key men Sergio Busquets, Eric Abidal, Carles Puyol and Javier Mascherano, and admitted his side missed their presence.

"All squads are reinforced every season," said Vilanova. "I said the other day that we didn't need to change much, but rather recuperate the players we do have.

Bayern equalled the biggest away win in a CL semi-final, set by themselves in April 2010 (3-0 at Olympique Lyon) and by Ajax in April 1996 (3-0 at Panathinaikos)

Bayern have kept a clean sheet in four consecutive CL knockout matches, a club record. The last club to keep at least four clean sheets was Manchester United in 2008 with five.

"Bayern have arrived at this point with all their players and we have many out. Despite the great squad that we have, you cannot win all the titles either.

"You can't win everything and the first leg has weighed heavily on this game."

Without their star man, Barcelona struggled to break down a resolute Bayern defence and the visitors' coach, Jupp Heynckes, said he thought Messi's absence influenced the match.

"We played an outstanding game but there is a difference of Barca with and without Messi," the 67-year-old said. "But it is a result one could not forecast.

"I know the philosophy of Barcelona and my team understood extremely well how to deploy our tactics. It was harder than it looked.

"My team was very focused; we knew what we were up against."

Bayern, who won the Bundesliga in record time this season, will contest a third Champions League final in four seasons, where they will meet fellow German side Borussia Dortmund at Wembley on 25 May.

They equalled the biggest away win in a Champions League semi-final, a record they jointly held with Ajax.

"Right now they [Bayern] are at an extraordinary level," Barcelona midfielder Xavi told Canal Plus. "They have been better and very much deserve to be in the final.

"But neither is that an excuse. Bayern have been better - mentally strong, physically extraordinary."