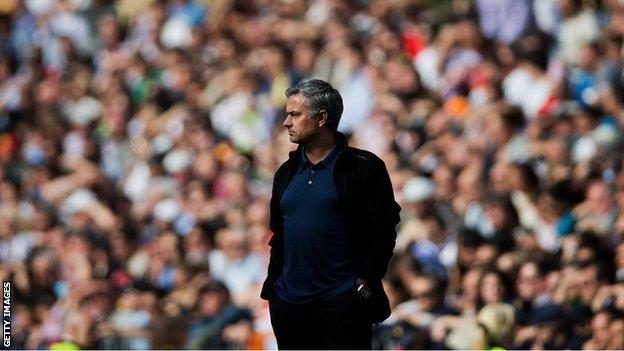 Like a lover in a stale relationship, Jose Mourinho has fluttered his eyelashes in the direction of the Premier League, with former squeeze Chelsea the apparent object of his desire.

"I know in England I am loved," he said after current club Real Madrid's Champions League exit to Borussia Dortmund. "I know I am loved by some clubs, especially one."

With Mourinho looking to be nearing the finale of his Madrid affair, inevitable end-of-relationship questions arise.

Was I better off with the ex? Am I more or less in love than I was before? Is it better to stay put?

The Portuguese has seemingly already made up his mind. None can match the love he felt from fans and media when he was at Chelsea. Indeed, the affection from Real supporters and the Spanish press has drained away.

"I am loved by the fans and the media [in England] who treat me in a fair way," said Mourinho. "I know in Spain it is different because many people hate me."

Hate is a strong word, but Mourinho is right to say his bond with the Spanish media is beyond repair.

"Mourinho effectively has no relationship with the Madrid-based media," Spanish football journalist Andy West told BBC Sport. "He doesn't trust them and has made that distrust plain, which of course has made them distrust him. It's become a vicious circle.

"He hardly ever attends press conferences unless he has to. The rest of the time he sends his assistant Aitor Karanka and avoids any media contact apart from the odd TV interview back in Portugal."

From the mouth of Mourinho

Jose's arrival: "Please don't call me arrogant, but I'm European champion and I think I'm a special one."

Jose on pressure: "For me, pressure is bird flu. I'm feeling a lot of pressure with the problem in Scotland. It's not fun and I'm more scared of it than football."

Jose on Wenger: "Wenger has a real problem with us and I think he is what you call in England a voyeur. He is someone who likes to watch other people. There are some guys who, when they are at home, have this big telescope to look into the homes of other people and see what is happening. Wenger must be one of them - and it is a sickness."

Jose on eggs: "The style of how we play is very important. But it is omelettes and eggs. No eggs - no omelettes! It depends on the quality of the eggs. In the supermarket you have class one, two or class three eggs and some are more expensive than others and some give you better omelettes. So when the class one eggs are in Waitrose and you cannot go there, you have a problem."

Perhaps the 50-year-old would be in a better place to accept a lack of love from the media if he was adored by the Bernabeu faithful, but that relationship is also in tatters.

Defending champions Real are trailing Barcelona by 11 points in La Liga, and Mourinho has often been greeted with hostility rather than the warm embrace of home - even when his side have been winning.

High-profile rows with fan favourites Sergio Ramos and Iker Casillas have not helped, the latter conflict also bleeding into Mourinho's stand-off with the media.

"They've never got on," continued West. "Casillas's girlfriend, Sara Carbonero, is a well-known television presenter so is obviously well connected throughout the Spanish media.

"Mourinho clearly suspects - possibly quite rightly - that any leaks from the camp come via Casillas.

"There was an obvious example of this a few weeks ago when Carbonero herself appeared on Mexican television and said Mourinho had a bad relationship with the players because he never communicated with them. It's pretty obvious who her source was."

All in all, the Real-Mourinho courtship looks to have only a handful of awkward dates - one of which is the Copa Del Rey final against city rivals Atletico - left to run.

And, after Real's third Champions League semi-final defeat in as many seasons, Mourinho, who has previously stated that his next job will be in England, has turned his eyes on the Premier League. According to some reports, a return to Chelsea is as good as sealed.

Much of Mourinho's previous three-year spell at Stamford Bridge was a mutual love-in involving Blues fans and large swathes of the media.

To the press, Mourinho was great value, a one-man headline factory. To supporters, the achievement of wrestling Manchester United and Arsenal aside to end a 50-year wait for a league title and then immediately following it with another, gave him a messianic status.

His declaration that he was "a special one" was the first of a string of memorable one-liners.

Eggs and omelettes, bird flu, Aston Martins, haircuts and his wife would all be topics of conversation during Mourinho media briefings, the entertainment of which had the press on his side. That advantage goes a long way to boosting a manager's popularity.

"He used the media very well, and everyone realised that no-one really failed from that transaction," said former Chelsea winger Pat Nevin.

"I once spoke to him and asked who he was actually speaking to when he came out with the one-liners - the players, the fans, the media, referees?

"'If they want complicated technical insight, I will give it to them, but they don't seem to want it so I just give them the lines'."

There were times, however, that Mourinho's mouth got him in to trouble, annoying and angering other clubs and their fans.

Writing in the Daily Mail some five months before Mourinho's Chelsea exit, Paul Hayward said the manager used comedy as a shield from the unthinkable - the sack.

Still, despite Hayward's prediction, Mourinho's dismissal in September 2007 was such a shock that even Prime Minister Gordon Brown had his say.

"The day he left I was inundated by thousands upon thousands of emails pleading with me to talk to the club to bring him back, they were utterly devastated," said Nevin.

Chelsea, having surrendered their Premier League crown to Manchester United in the previous campaign, were lying fifth in the table, two points behind leaders Arsenal.

They had just drawn 1-1 with Norwegian side Rosenborg in their opening Champions League match of the season, watched by a crowd of only 24,973 - a sign, perhaps, that Mourinho's brand of football had lost some of the supporters' good will?

"There were a few people that began to get tired of that and there was a bit of me that wondered if the next guy might provide more entertainment."

There have been seven 'next guys' through the Stamford Bridge entrance door since Mourinho's exit.

Carlo Ancelotti matched his achievement by winning the title, while Roberto Di Matteo went one better by bringing owner Roman Abramovich the Champions League crown he coveted above all others.

When Di Matteo was sacked in a move similarly unpopular as the removal of Mourinho, Abramovich, in Nevin's words, "trawled the world and found the manager the fans least wanted" by appointing Benitez.

With the Spaniard leaving Stamford Bridge at the end of the season and Mourinho set to exit Real, he and Chelsea look to be available to one another once more.

There is, however, one question remaining for The Special One, one that maybe even he cannot answer.

Will the ex take me back?