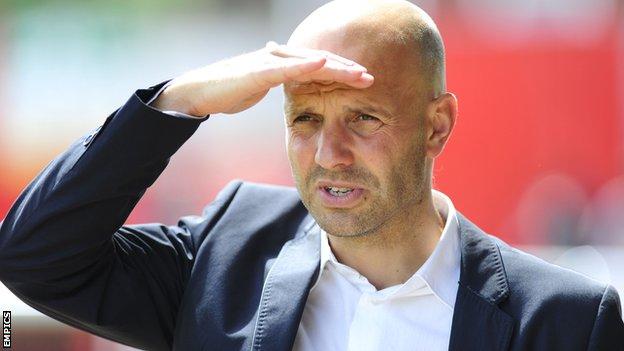 Exeter City boss Paul Tisdale says the club could struggle in League Two next season because of a lack of funds.

The fan-owned club's wage fund has dropped from last year and boss Paul Tisdale has had to release four senior players as he cannot afford them.

"What we're looking at, probably, is a team that will have a lot of young players," he told BBC South West Sport.

"I think we're in for a period of a couple of years of trying to retain our status in League Two."

As well as Tisdale says he currently does not have the funds to offer new deals to top-scorer Jamie Cureton, fellow striker John O'Flynn and former England Under 21 international Matt Oakley.

Unlike other clubs that have wealthy owners, City is owned by a supporters' trust, meaning there is not the facility for Tisdale to call upon for extra funds.

"The ownership has been in place for 10 years now, it was brought in to salvage the club when it was needed and it was perfect for that moment," Tisdale added.

"The trust now hold the mantle, it's their responsibility.

"They're accountable for what ultimately will be the next 10 years I suppose and how we develop and progress or not.

"I'm very happy to be here because I like the way it works, but people have to understand that the investment into the club from the trust gives it stability, but is also very minimal in terms of financial input."

Tisdale says the club will only increase its funds through either a cup windfall or a sale.

"I don't want to sell anybody, there's probably two or three players who, off the back of this season, will be of interest to other clubs," he said.

"Or we have to look at the ownership model of the club and ask can that be altered and adjusted to raise more money."