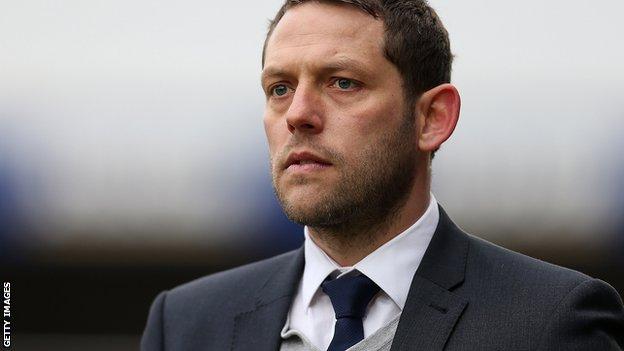 Leam Richardson has left his position as manager of Accrington Stanley to become Paul Cook's assistant at fellow League Two side Chesterfield.

Wright had been with the club, who finished eighth in League Two this season, since joining with former boss John Sheridan in 2009 and spent two months in caretaker charge prior to Cook's arrival.

1 November 2012: After a short spell as caretaker manager, Richardson is appointed as Accrington boss on a permanent basis

1 January 2013: Ends a run of nine games without a win with victory over Chesterfield

12 March: A 3-0 home defeat by Fleetwood leaves Accrington bottom of the Football League

20 April: Stanley win five of their next eight games and guarantee survival with one match to spare by winning at Bristol Rovers

Speaking about Richardson's arrival, Cook told the club website: "Having worked with him before, I'm delighted to have been able to bring in Leam.

"He has great knowledge of League Two, as a player, assistant manager and manager and I'm sure he's going to be a great asset to our club."

Stanley players have been reacting to the departure of Richardson, who guided Accrington to safety in the final weeks of the season, on Twitter.

Ex-England striker Francis Jeffers posted: "Gaffer has gone, wish him all the best in his new job. Enjoyed playing for him over the past couple of months."

And full-back Lee Molyneux added: "So the gaffer has officially gone. Good luck to him. Done a good job this year and gave me a chance playing."

Stanley were bottom in March but a run of five wins in eight matches guaranteed survival with a game to spare.

Richardson described the feat as a "minor miracle" and while he spoke positively of his side's chances of a better season next time around following Stanley's final game of the campaign - a 3-0 home defeat by Oxford United on Saturday.

Accrington's managing director Rob Heys told BBC Radio Lancashire: "For Leam to decide that he wants to move on did come as a shock. You have to say 'that's football'. There will always be other opportunities for people and there will always be people that can come in and take over.

"When Paul left, there were some conversations regarding him wanting to take Leam with him. We'd like to think we made him a good offer to stay and take charge, and that proved to be the right thing to do because he kept us up. A lot of the credit for that must go to Leam.

"Now we've reached the end of the season, the conversations have been had again and Leam's decided his future lies elsewhere. I'm sure Leam had a number of reasons and he's chosen to make the move."

The 25-year-old joined on a two-year deal from Doncaster last summer and made 44 appearances.