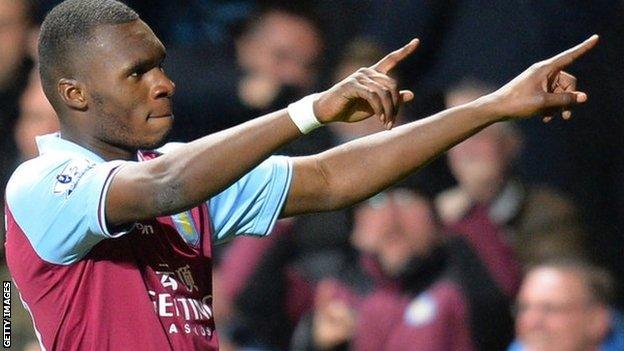 Paolo Di Canio - as colourful in defeat as in victory - complained Sunderland's "stomachs were too full" after a recent revival and this feeling of relaxation was their downfall at Aston Villa.

If the Italian manager's analogy was designed to shine a light on Sunderland's failings in this 6-1 mauling, it also illustrated why counterpart Paul Lambert enjoyed the finest night of his time at Aston Villa.

Sunderland may have felt a little bloated and comfortable after recent wins against Newcastle United and Everton but Lambert's Villa were driven towards Premier League safety by sheer hunger.

Christian Benteke's 18 goals is the most any Aston Villa player has managed in a single Premier League season - Dwight Yorke scored 17 on two occasions.

And no-one epitomised this more than the towering figure of 22-year-old Christian Benteke, whose 17-minute hat-trick simply cemented his love affair with the Holte End and confirmed his £7m purchase from Belgian side Genk as one of the signings of the season by Lambert.

Di Canio described this game as Sunderland's "Champions League final" - but it was Benteke who produced the performance worthy of this elevated stage.

A scan of the statistics at the final whistle revealed they were heavy with significance.

Villa's victory not only gave them the breathing space of a five-point gap between themselves and Wigan in the bottom three but also created new concerns in the pack around them.

Wigan have the greatest worries after Villa's biggest win since they beat Derby County five years ago. Wigan may have an extra game to work with but also have an FA Cup final with Manchester City on the agenda.

Manager Roberto Martinez has made a habit of late, great escapes but now faces his biggest test.

And what of Newcastle and Sunderland after an utterly abject 48 hours for those of a Tyne and Wear persuasion, with both sides shipping six goals in alarming fashion?

Newcastle's 6-0 thrashing by Liverpool looked even more damaging when set alongside Villa's five-goal victory margin. It has prompted a remarkable turnaround in goal difference, on which so much can depend at this stage of the season, and saw Villa leapfrog United.

Sunderland are also on 37 points and Di Canio announced they would work "with blood in their eyes" - answers on a postcard for that one - to rectify the humbling here.

As they created an air of chaos around them, there was only delight for Aston Villa and a sense of vindication for Lambert towards the conclusion of a season which has contained much suffering.

And so much of this came in the formidable frame of Benteke, a young emerging talent on which he has staked so much.

Lambert decided very early on that it was Benteke who should be the spearhead of his new Villa era, creating much debate and questioning by sidelining £24m England striker Darren Bent, even during Villa's struggles.

Sunderland haven't won any of their last 17 Premier League games on a Monday, a run stretching back to April 2002 when they beat Leicester 2-1. Sunderland's next game? At home to Stoke next Monday.

The Scot stuck to his decision and his principles. Now the debate no longer exists as Benteke delivers on the faith Lambert placed in him.

Bent was restricted to a role as substitute on Monday, passing Benteke on the way onto the pitch as the hat-trick hero fell into the embrace of his manager with Villa Park echoing to a standing ovation with 11 minutes left.

It is likely the final word on this argument will come with Bent's departure this summer. Villa's fans will wish him well but there is hardly likely to be an uprising. With Benteke, Gabriel Agbonlahor and Andreas Weimann offering power, pace and movement there is no place for Bent.

Benteke, meanwhile, has a reputation that grows by the game and he may yet be the target for other clubs even if Villa complete their survival mission.

The good news for Villa fans is that the player enjoys a close bond with his manager. The Belgium international is keen to play at a club where he will figure regularly in the year leading up to the World Cup in Brazil in 2014.

With a new contract being speculated upon, these factors play out well for Villa.

Benteke has all the tools to be a truly outstanding striker. Fleet of foot for one so big and with good control, he may still miss a few but the ratio of chances taken is on the up.

And as Lambert pointed out, with pictorial evidence to prove it, his aerial power is such that he actually rose above the crossbar and headed the ball down into the net for his second goal.

There have been some miserable lows for Villa this season, such as the 8-0 thrashing at Chelsea and that desperate two-leg semi-final defeat by League Two side Bradford City in the Capital One Cup, but there was an air of optimism on this thunderous night at Villa Park.

Lambert has stuck by his determination to cajole and coax young players, not simply because of force of circumstances, and this was his reward. Villa have looked fragile at pressure points this season but here they dealt with the stress of the occasion superbly.

Benteke will claim the headlines but Lambert's words had merit when he said Matthew Lowton was the game's outstanding player. The 23-year-old signed from Sheffield United in the summer made a big mark with his spectacular strike in the recent win at Stoke, but here his whole game was rounded.

Lowton's finest moment came with the astute pass for Weimann's goal, with Ron Vlaar and Agbonlahor scoring the goals that topped and tailed this win.

Villa still have much work to do but this win - fired by Benteke's magnificent contribution - delivers light at the end of what has been a long tunnel for Lambert. There is now a greater sense of well-being around Villa than at any time this season.